A woman who once weighed 18 stone has revealed how an embarrassing encounter with a camel sparked a dramatic weight loss journey – and let to her winning a bodybuilding competition.

Carla Sheard, from Featherstone, West Yorkshire, says pregnancy and takeaways led to her gradually gaining weight in her early twenties, but that being told she would need ‘a bigger camel’ while on holiday in Tunisia in 2014 left her ‘mortified’.

Fast forward nearly seven years and following a diet and exercise overhaul – and a £2,500 tummy tuck operation to get rid of 7lbs of excess skin – Carla, 27, says she now has the body of her dreams.

The mother-of-two has shared how she ballooned to 18 stone at her heaviest after a passion for takeaways and sweet treats took its toll on her health and her physique.

She says the incident with the camel was literally the straw that broke the camel’s back when it came to losing weight – offering the motivation she needed to tackle her ever-expanding waistline. 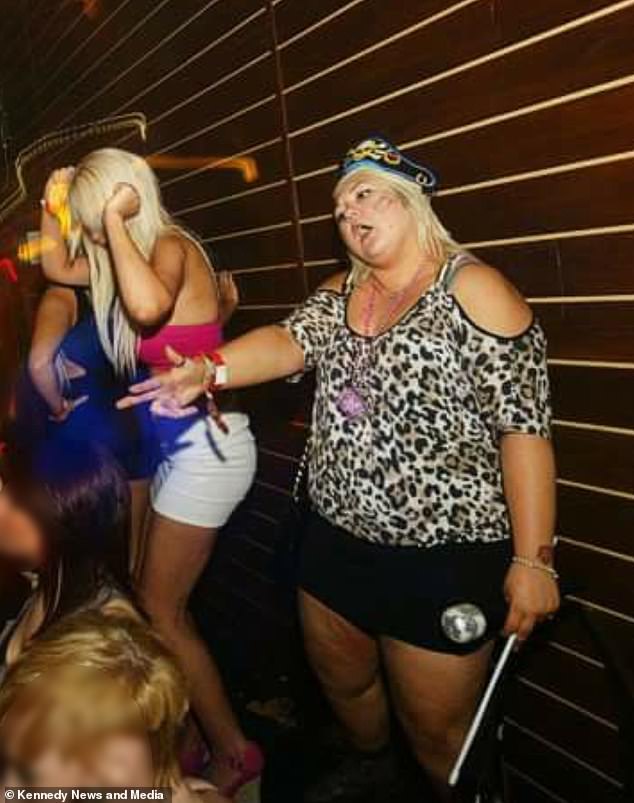 Carla Sheard, from West Yorkshire, tipped the scales at 18 stone in 2014 and says an awkward encounter at a Tunisian tourist attraction, in which she was told she’d need a ‘bigger camel’ left her vowing to lose her excess weight 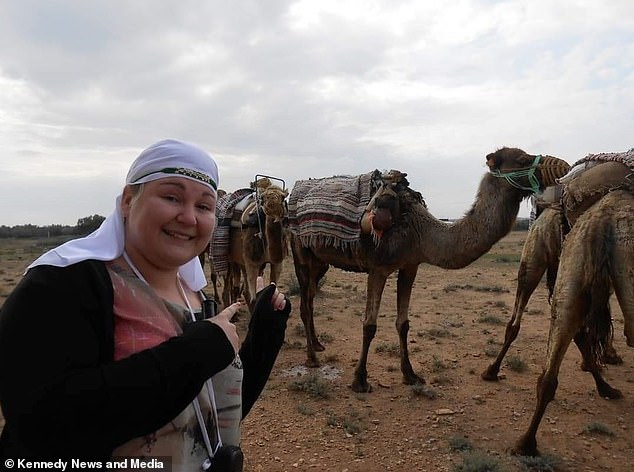 5ft 2in Carla, who has two children, was told ‘oh you big lady, you [need] big camel’ at the tourist attraction, something which left the West Yorkshire woman mortified 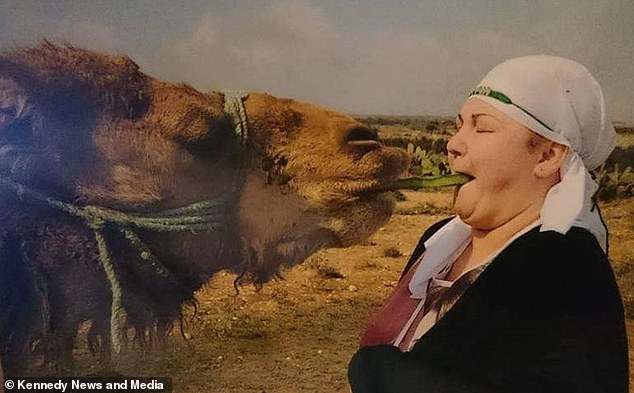 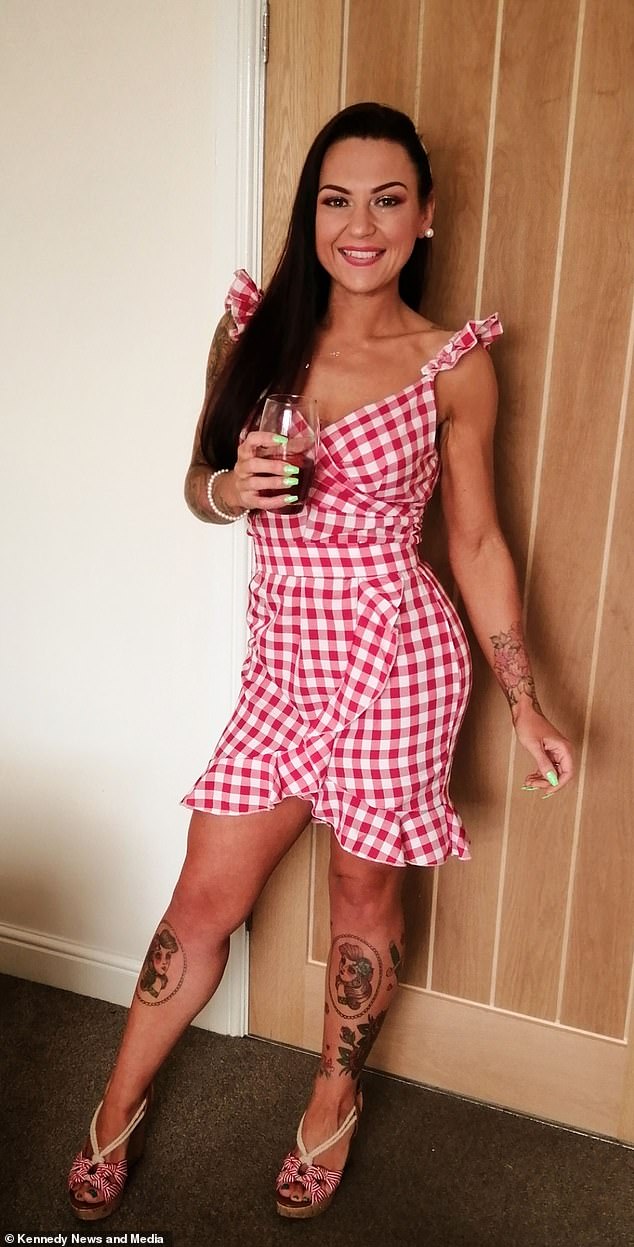 Nearly seven years on and Carla has shed ten stone, more than half of her body weight

Retelling the story about her Tunisian nightmare, she says while queuing for a camel ride, the organiser glanced at then 20-year-old Carla and declared ‘you big lady, you [need] big camel’.

After wandering off to find a bigger animal, 5ft 2in Carla was unceremoniously hauled onto its back by three burly men while the rest of the group looked on.

She explains: ‘Getting fat-shamed by a camel was awful, it was really horrible. We all got off the coach and the organiser was telling everyone to gather round and was allocating people to camels.

‘He looked at me and went “oh you big lady, you [need] big camel”. When he said that in front of everyone I just looked at my friend Becky absolutely gobsmacked, my jaw just dropped.

‘They brought over this bigger camel and it took three blokes to push me up, it was so embarrassing especially as everybody else was sat watching. For him to say “you big lady” made me feel horrible, it was an awful moment.’

When she returned home, Carla ditched the fatty takeaways and calorific treats, started Slimming World and lost a stone but then fell pregnant with her son – starting a cycle of yo-yo dieting. 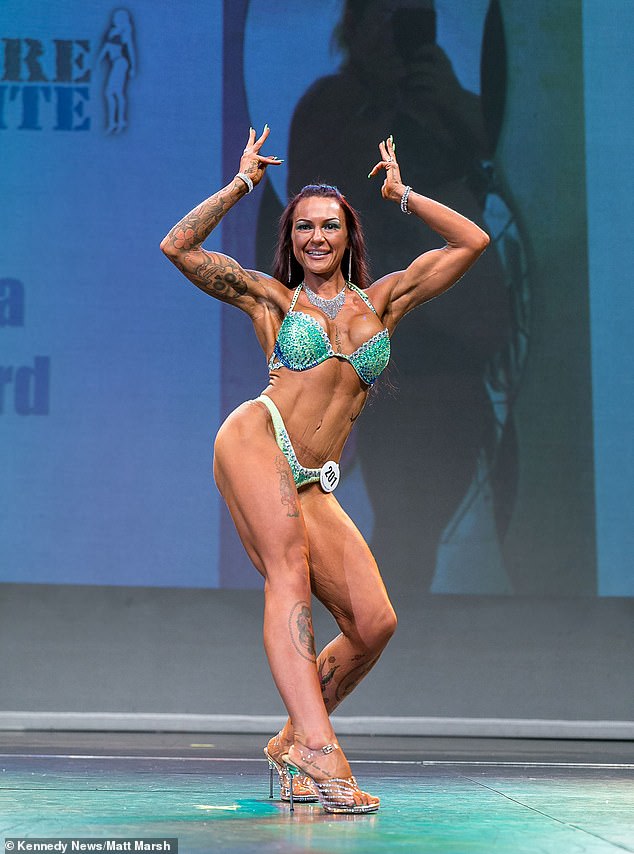 Following a diet and exercise overhaul – and a £2,500 tummy tuck operation to get rid of 7lbs of excess skin – Carla says she now has the body of her dreams and has placed first in bodybuilding competitions 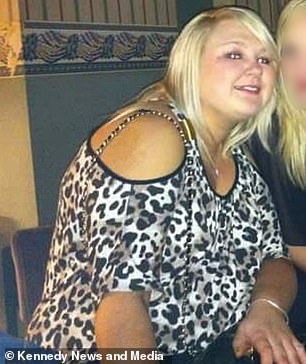 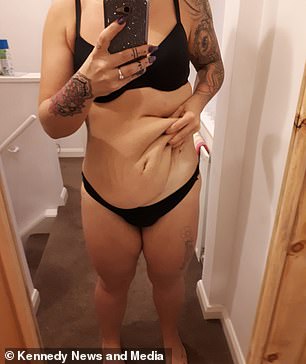 Carla was left with rolls of excess skin on her tummy, and decided to pay for a £2,500 operation to get rid of them. She says she was getting yeast infections because of the excess skin 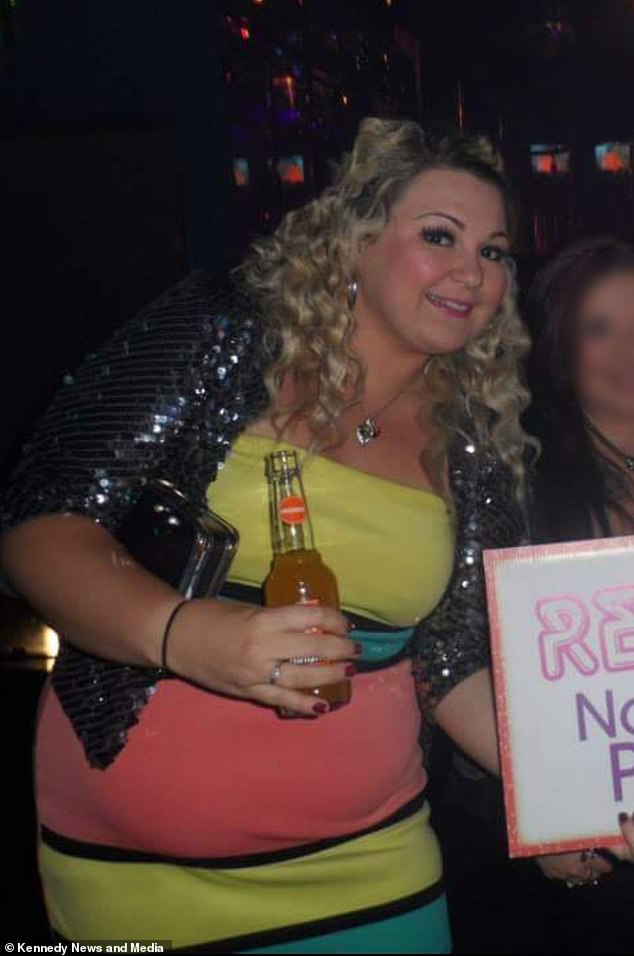 Carla pictured close to her heaviest weight of 18 stone, she says she ‘couldn’t even make it to the top of the stairs’ 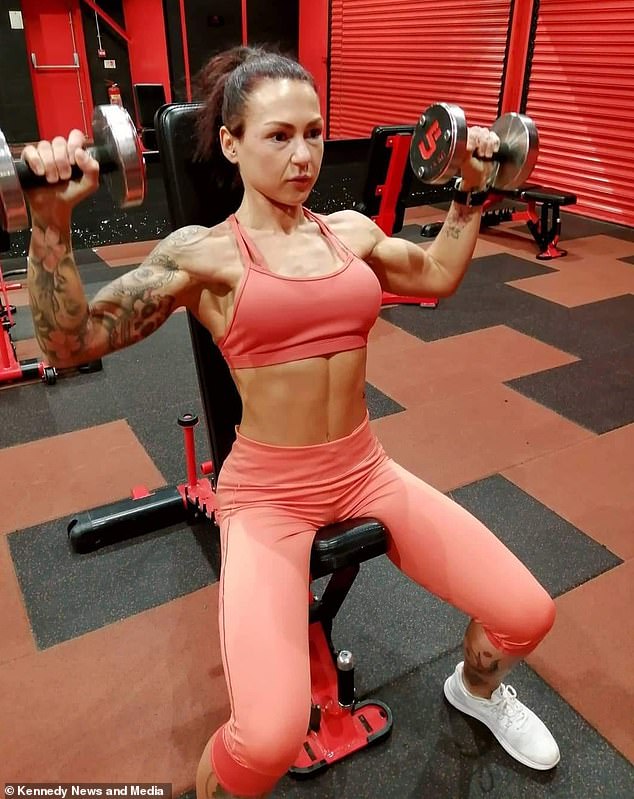 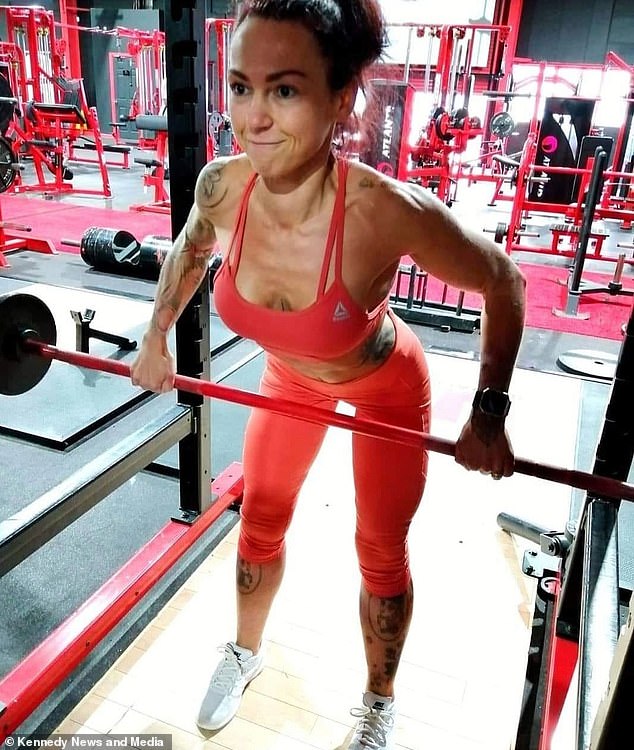 She says: ‘I feel I’ve struck a happy balance. When old photos appear on my Timehop I just think ‘how was I ever that big?’ 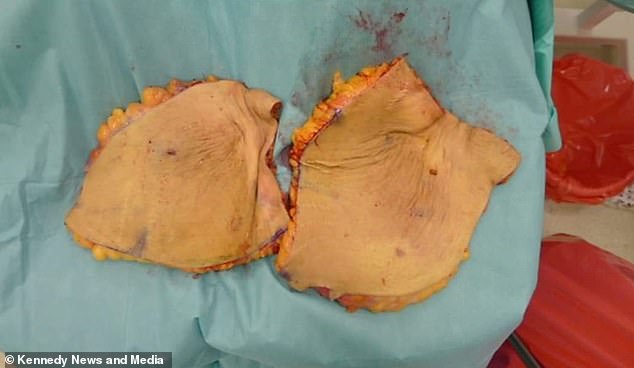 After giving birth to Toby, now six, in December 2014, and finding she struggled to catch her breath while carrying him up the stairs, Carla by then a size 20 vowed to finally get fit.

In ten months, she lost a whopping seven stone, shrinking to a size 12 and weighing 10st 12lbs, but then fell pregnant again with Tallulah, now four, in September 2016.

It’s still strange to think when I’m online shopping I can buy whatever I like the look of, I don’t have to think about whether it’ll cover my tummy…

This time, Carla hit the carbs and quickly piled on five of the seven stone she previously shed. But after Tallulah was born, Carla was determined to make permanent lifestyle changes.

With the support of her loving 27-year-old warehouse worker husband John, Carla decided to calorie count and hit the gym three times a week.

Carla said: ‘I’ve been big forever. When I was 11 I wore a size 16 dress. My mum used to have to make my school clothes because none fit me by the time I was in high school.

‘I remember going to Asda and getting a ladies size 22 in a fitted shirt as that was the only one that would go over my stomach.

‘When I was older and worked as a carer I’d do 12-hours shifts. The last thing I wanted to be doing was cooking a meal from scratch so it would always be a takeaway – every single night.’ 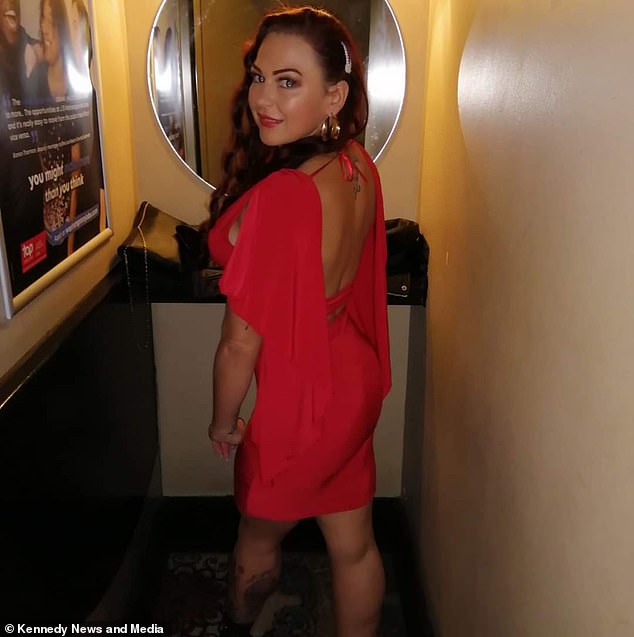 Determination and preparation is the key to sustained weight loss, says Carla. The mother of Toby and Talulah says she preps meals in advance to ensure temptation doesn’t kick in 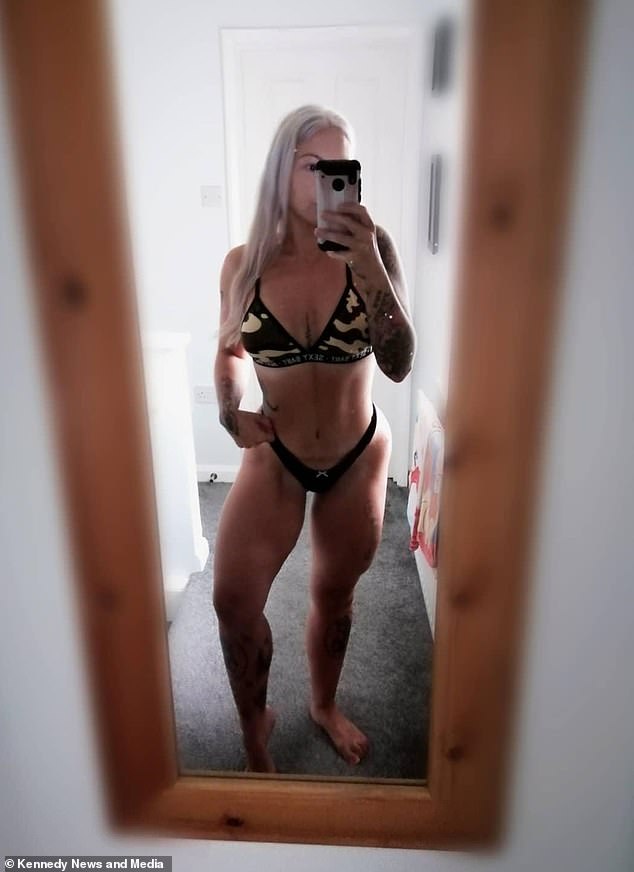 After Tallulah, her second child was born, Carla was determined to make permanent lifestyle changes and has astounded herself at what her body now looks like

Despite battling weight struggles at school, Carla was never bullied and found love with highschool sweetheart John Sheard at the age of 15.

Carla said: ‘Thankfully I was never bullied for it, I was seen as a tough one anyway.

‘We’ve been together since we were 15, we were high school sweethearts, and he’s still with me.

‘At my heaviest and my lightest he’s been with me through it all. During the pandemic last year I put on a little bit of weight and asked ‘would you still love me if I get fat?’.

‘He said ‘oh shut up I’ve loved you all the time. Six weeks after, I had Toby I was my heaviest weight of 18 stone and I couldn’t even make it to the top of the stairs.

‘I literally had to stop for breath half way up. He looked up and smiled at me and I thought ‘I can’t do this, I’ve got to lose it for him’.

‘Something clicked immediately and I went downstairs and I cooked a lasagne for tea instead of having a takeaway.

‘Something came through the post for Slimming World so I went back and I ended up losing seven stone, but then I got pregnant again and gained five.

Lunch: Chicken salad sandwich with mayonnaise, a scotch egg and a can of full-fat coca cola.

Snacks: Chocolate bar and a bag of crisps

Dinner: Big takeaway or a large supermarket pizza with a bottle of fizzy pop.

Lunch: Chicken or tuna wrap or a tuna pasta salad, followed by a satsuma, an apple, some pineapple and some grapes. If still peckish, occasionally will have a bag of Snack A Jacks.

Dinner: Home-made meals including shepherds pie made with 5% mince and served with veg or chicken stir-fry with rice. For dessert, a chocolate orange protein mug cake or dairy-free yoghurt

Meal one: one egg and three egg whites omelette

Meal two: 120g of yoghurt with scoop of protein

Meal four: 75g of 5% mince, 100g potato (for the first three months, no potato for the final three months) and veg

‘I thought ‘if a girl can’t eat when she’s pregnant when can she eat?’ My mindset was absolutely terrible with food, I ate three breakfasts every morning when I was pregnant.

‘After I had Tallulah I thought ‘I’ve done it once I can do it again’, this time I decided to go solo and do calorie counting.

‘One of my friends had just done a bodybuilding show and I’d been to watch her and thought it was amazing so I started going to the gym with her and she showed me what to do.’

Over the course of two years steadily Carla dropped the fat and gained lean muscle, under the watchful eye of a bodybuilding pal and had a £2,500 tummy tuck to lop off 7lbs of excess skin.

Carla said: ‘The excess skin on my belly was absolutely shocking, it really upset me. I was getting yeast infections underneath it and in my belly button, it was smelling too, it was really bad.

‘After having the tummy tuck in February 2018 I was back in the gym six weeks later but to be fully healed it took a good six months.

‘I wore a crop top every single day that summer. John was thrilled with how confident I was but he wasn’t happy about how much money I was spending on clothes.’

Inspired by gym members who trained for bodybuilding competitions, Carla decided to go all-in and embarked on a gruelling six-month regime and strict six-meal-a-day diet. 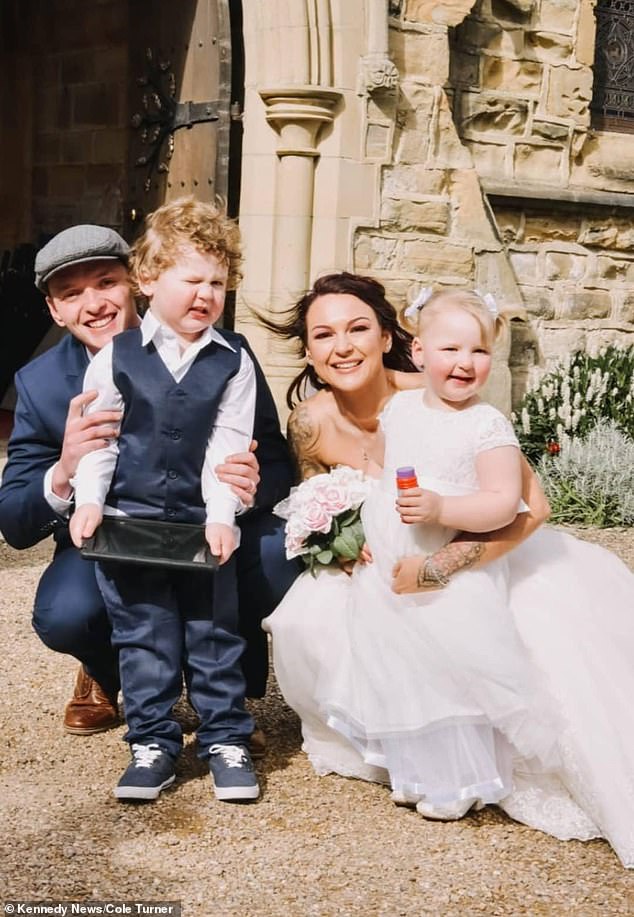 Carla pictured with her husband John and their two children on her wedding day, she says John has loved her whatever weight she has been

In July 2019, Carla stepped onto the stage a trim size eight and weighing eight stone – her competition target weight.

And all her hard work paid off as thrilled Carla was announced the winner in the transformation category.

Carla said: ‘It was a very intense experience prepping for the competition. I went down to 8st so I’d lost bang-on 10 st by show day and I was a size 8.

‘Losing 10 stone was a real mile-stone moment. When I heard my name being announced as being first it was amazing, I was just first pumping the air.

‘All I could see was all my friends and family in the audience screaming and jumping up and down. It felt like such an achievement and worth it for that moment.’

After scooping the top fitness gong at Pure Elite, Carla eased up on her gym sessions, dropping down from six to four sessions a week and slowly introduced a wider variety of meals into her diet. 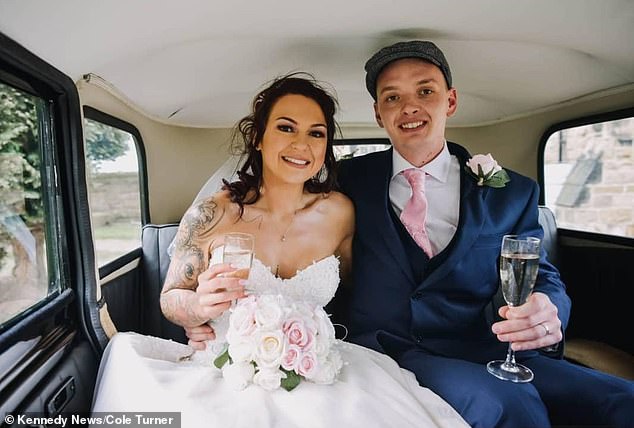 John, 27, Carla’s husband, supported her decision to try and lose weight – the couple pictured on their wedding day

Now a trim size 10 and 10st 7lb Carla is proudly maintaining her healthy lifestyle for the sake of herself and her family.

Carla said: ‘I had a bad relationship with food, but I’m doing ok now. I find I’m a lot stronger and fitter by being that bit bigger.

‘When I go to the gym now it’s a combination of cardio and weight training and I’m lifting a lot heavier now. It’s still strange to think when I’m online shopping I can buy whatever I like the look of, I don’t have to think about whether it’ll cover my tummy.

Her top tips for ensuring you don’t buckle in the face of a Friday night takeaway?

‘Determination and preparation is the key. If you fail to prepare, you prepare to fail, I meal prep and I’m very structured with that’, she says.

‘If you know you’re having a busy few days, make a big lasagne, shepherds pie or enchiladas and re-heat it so you’re not tempted with unhealthy choices. My advice to anyone struggling in lockdown would be to get up and get dressed, if you’re dressed for the day you’re a lot more productive.’

Always Hungry Midmorning? You May Not Be Eating Enough Calories at Breakfast

People Who Eat This For Breakfast NEVER Lose Weight (Hint: It’s SO Fattening)

Some of these 12 healthy eating tips are hard to swallow

12 Breakfast Foods to Get a Flat Belly, According to Experts

My COVID story: “My mom tested positive right after getting vaccinated”