A nurse who used to run in the dark so no one could see her has dropped an incredible eight dress sizes after she kicked her expensive 40-a-day smoking habit.

Karen Gardener, from Sydney, weighed 118 kilos after she lived off an unhealthy diet of large portions of carb-heavy dishes like spaghetti bolognese with garlic bread or chicken schnitzel with potato bake with fries.

In between meals throughout the day, the 39-year-old – who wore size 24 at her heaviest – would consume sugary snacks, flavoured milk and soft drinks.

But after surviving a heart attack, the mum-of-two slimmed down to a size eight after she dropped a remarkable 57 kilos, nearly half her body weight.

Karen Gardener, from Sydney, weighed 118 kilos after she lived off an unhealthy diet. She dropped eight dress sizes after she kicked her expensive 40-a-day smoking habit 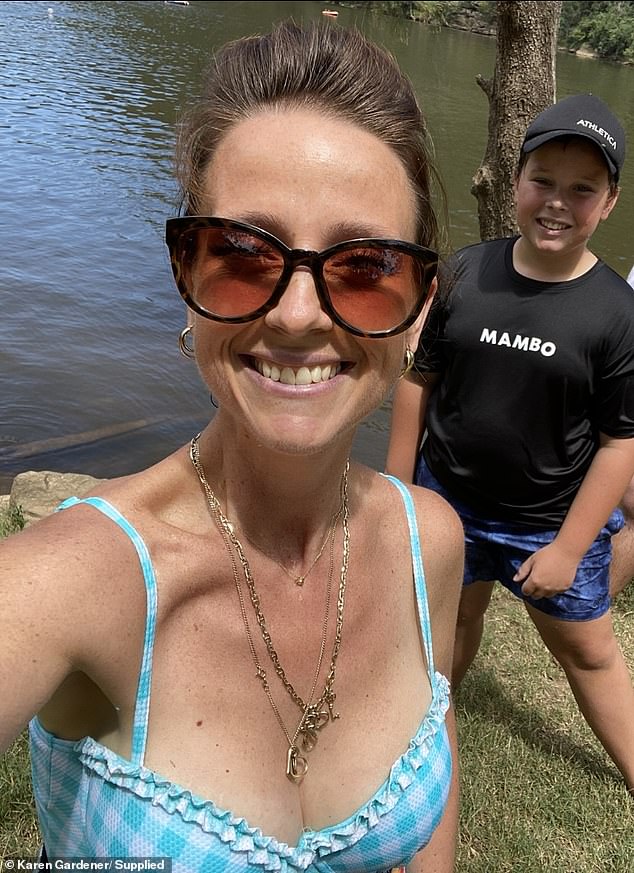 Since quitting her smoking habit and losing weight, Karen now has the energy to go on adventures with her 11-year-old son (pictured together)

Before her weight loss, Karen said she led a ‘very unhealthy’ lifestyle.

‘I was very tired all the time. I never exercised. I smoked close to 40 cigarettes a day, which didn’t help how I felt,’ she told Daily Mail Australia on World No Tobacco Day.

‘I would come home from work and go straight to sleep every day because I had no energy and felt exhausted. Looking back, it was a vicious cycle.’

Karen said her smoking habit started at the tender age 14.

She believed her bad eating habits stemmed from her childhood because she was never taught how to cook or eat healthy foods.

‘As a result, my eating habits were very unhealthy without me really realising it. It was both the portion sizes and the types of foods I was eating,’ she said.

‘On the way to work I’d buy an apple Danish and mocha milk. For lunch and dinner, I’d eat large servings of fried or carb heavy foods that were high in saturated fat,’ she said. 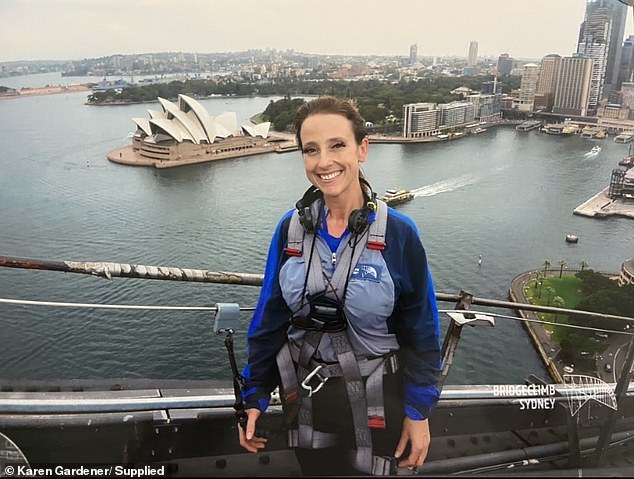 After dropping 57 kilos, she got to climb the Sydney Harbour Bride with her family 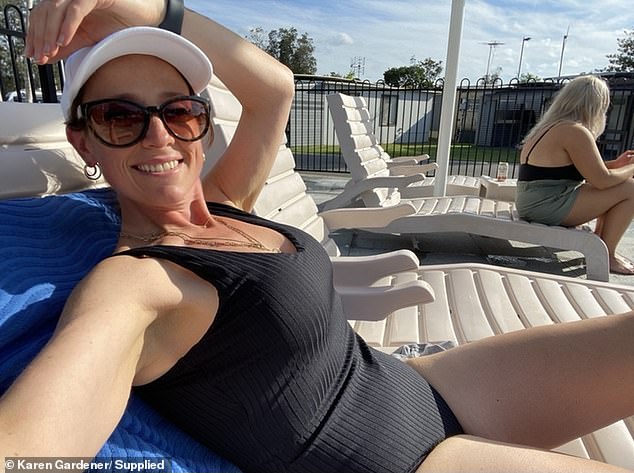 As her weight spiralled out of control, Karen said she found herself struggling with her everyday life.

‘I was sick of always being the fat friend. I was always the biggest one. It meant I couldn’t find clothes to wear, which made shopping frustrating and knocked my confidence,’ she said.

‘I had always wanted to be able to go jogging but I would never attempt to do it because of my weight. I wouldn’t go on rides in case the harness didn’t fit, go bike riding or participate in things because I was too embarrassed.’

At the age of 38, she experienced a health scare after suffering a heart attack.

‘I didn’t know what was happening at the time but I found out it was a heart attack afterwards. It’s terrifying to learn you’ve had a heart attack at any age, but you don’t often hear of it happening to people in their late 30s,’ she said.

‘I was experiencing upper back pain. I have a bulging disc in my upper back though, and every now and then it flares up, so I thought it was just that. But my husband saw how bad I was getting and took me to the hospital.’

Her turning point to lose weight came after she quit smoking for good.

‘I’d wanted to get healthier for a long time but I’d tried everything from weight loss tablets to shakes but they were never a long term solution,’ she said. 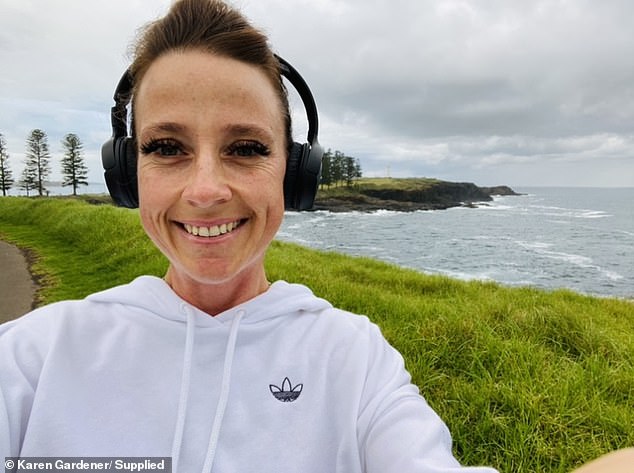 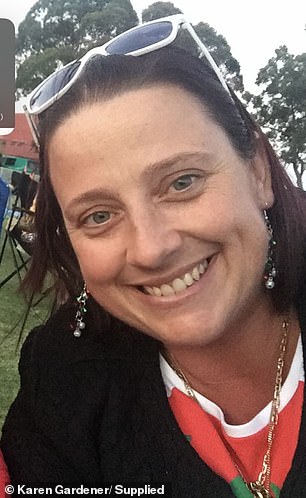 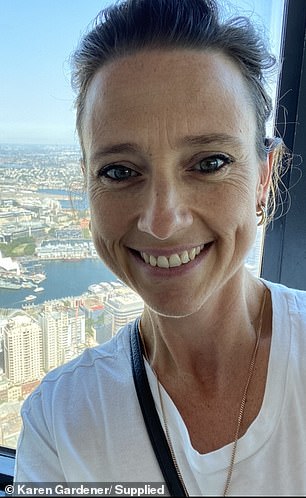 SNACKS: Dates, a piece of fruit or carrot sticks

DINNER: Beef and broccoli stir fry is a family favourite

DESSERT: A piece of chocolate chickpea cake plus a teaspoon of WW Hazelnut Cocoa Spread

GUILTY PLEASURE: I have a love affair with ice cream

And so she turned to weight loss program WW, formerly known as Weight Watchers, where she was taught how to overhaul her diet.

‘It took around three years to lose 57 kilos. One of the most important steps was becoming aware of what I had been eating previously by tracking,’ she said.

‘On WW, every food has a SmartPoint value and you have a daily budget which you can spend on anything you like. I quickly saw that my budget wouldn’t go far if I kept eating my usual Danish pastry for breakfast every day.;

The healthy foods she didn’t have to track included fruits, vegetables, and lean proteins like chicken, fish and eggs.

‘I started building my meals around these and using the rest of my budget on other things I enjoy. It’s not about cutting things out completely, but about enjoying everything in moderation. You don’t have to give up anything. It’s about balance, which is why I’ve been able to stick to it for so long,’ she said.

Her exercise regime went from nothing to working out every single day.

‘Obviously, I started slowly, going on walks. I would never have gone out in public and run. I used to run in the dark so no one could see me when I first started, and now I’m like “who cares, I’m 39 and I’m running”,’ she said.

Eventually she joined a gym.

‘It made me feel good and more energetic so I kept it up,’ she said. 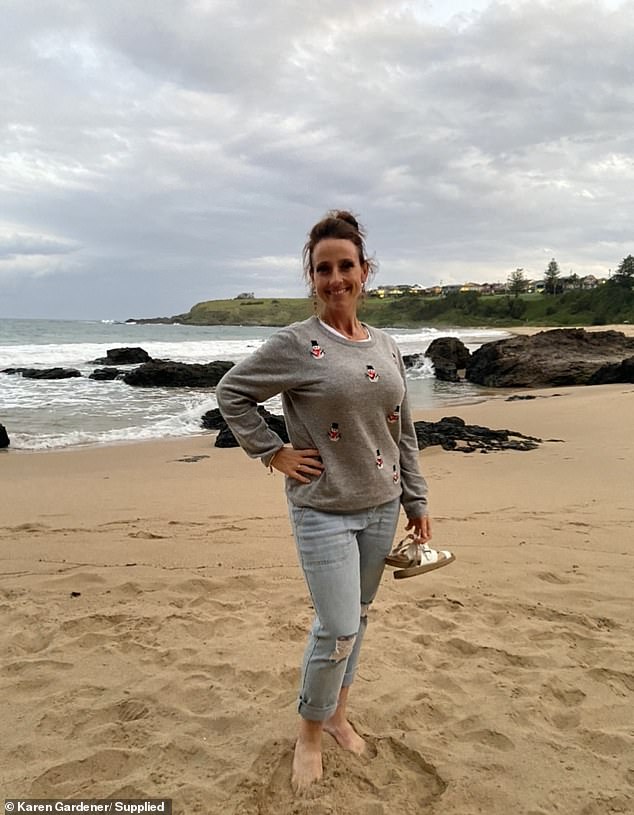 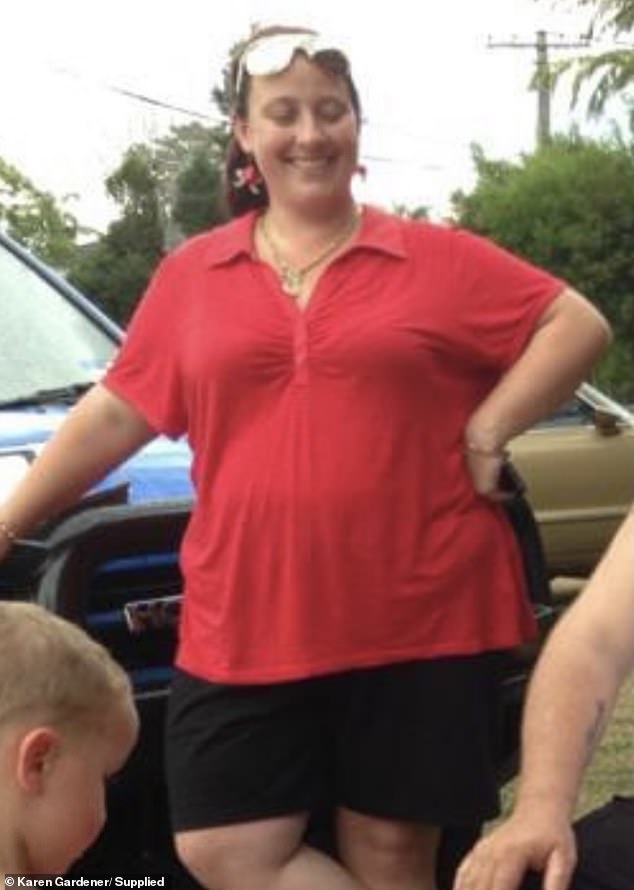 Before her weight loss, Karen said she led a ‘very unhealthy’ lifestyle, which included smoking 40 cigarettes a day

Her fitness routine now involves running, lifting weights, taking step classes and working out in the comfort of her home.

Karen – who now wears sizes eight to 10 – said she now feels healthier more than ever before.

‘I almost don’t recognise myself when I see old pictures of myself. I feel fabulous now and so healthy. I get out more, I do more, I’m so much happier,’ she said.

‘I can wear swimming costumes without shorts, it’s amazing. The only downfall is, I get colder now that I’m thin. I was always overheating when I was overweight and now I’m always freezing.

‘There’s so many things I do now which I wouldn’t have considered doing before.’

After slimming down to her dream body, Karen – who now weighs 61 kilos – said she now has the energy to go on adventures with her 11-year-old son.

‘I did the Sydney Harbour Bridge climb with my son, we went camel riding, go-karting and tobogganing. All of these things I would’ve usually just watched from the sideline but now I’m actually doing them,’ she said. 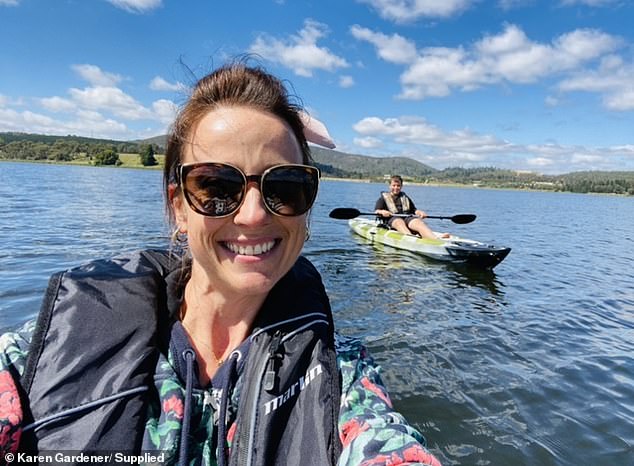 For those struggling to tweak their lifestyle, Karen said:  ‘Committing to weight loss and giving up smoking can be very similar; sometimes it takes a few attempts.

‘Just because it hasn’t worked for you in the past, doesn’t mean it can’t the next time. A lot of it is to do with mindset.

‘This time, I went in seeing it as a long term lifestyle change rather than putting pressure on myself to be perfect the whole time. It’s about small changes repeated over time.’

She added: ‘I can’t help but think afterwards how lucky I’d been to have made such positive changes to my health since by losing weight and giving up smoking, as who knows how it might have panned out if I hadn’t.

‘Would I still be alive if I wasn’t as healthy?’