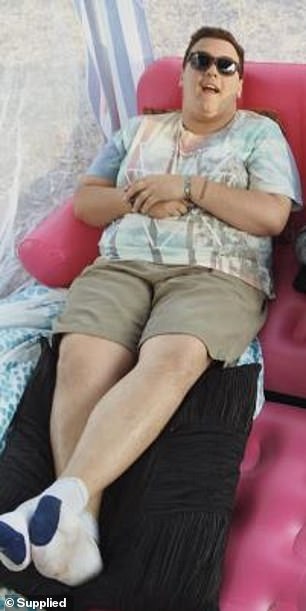 An Australian man has revealed how he lost 55kg in just eight months after becoming ‘sick of the sight’ of his own reflection.

Aaron Hickey, 28, had been ‘a big boy’ for as long as he could remember but four years ago when he tipped the scales at just over 130kg he knew he needed to change his lifestyle.

The Melbourne-based IT consultant told Daily Mail Australia he had big dreams for his life which didn’t match the body he was in.

‘I couldn’t even get through a game of tennis with my mates.’

Aaron started his weight loss journey when he was living at home with his parents. He would drink a litre of Coke each day, and reach for junk food when he was hungry or bored.

Every Thursday night when his family ordered takeaway, Aaron would order the biggest meal on the menu and easily demolish 2000 calories in a single sitting.

He had started smoking, would never drink water and didn’t exercise.

But one day as he looked at his reflection in the mirror, he decided to change.

Now the IT consultant, 28, cuts a trim figure and is working on building muscle 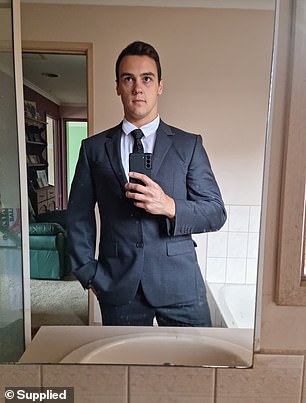 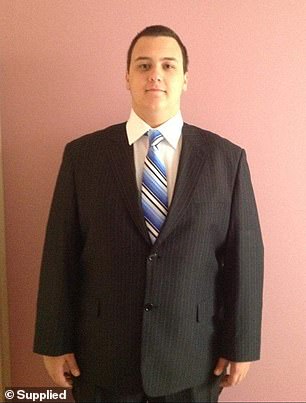 ‘I just gave it all up cold turkey, I stopped smoking, didn’t drink Coke and stopped having caffeine,’ he said.

He followed a Lite n’ Easy meal plan, eating 1500 calories per day, and drank water instead of Coke.

When his family tucked into their hamburgers and chips on takeaway night, Aaron heated up a frozen meal.

‘That first day was really hard but I knew I had to do it,’ he said.

‘As soon as I started to diet it made sense to me, and when I saw the number on the scales dropping every week it gave me all the motivation I needed.’

He started walking, then jogging and before long he was running.

The weight melted off and he felt amazing.

After dropping about 45kg, Aaron went overseas, did a high ropes course and joined a gym. 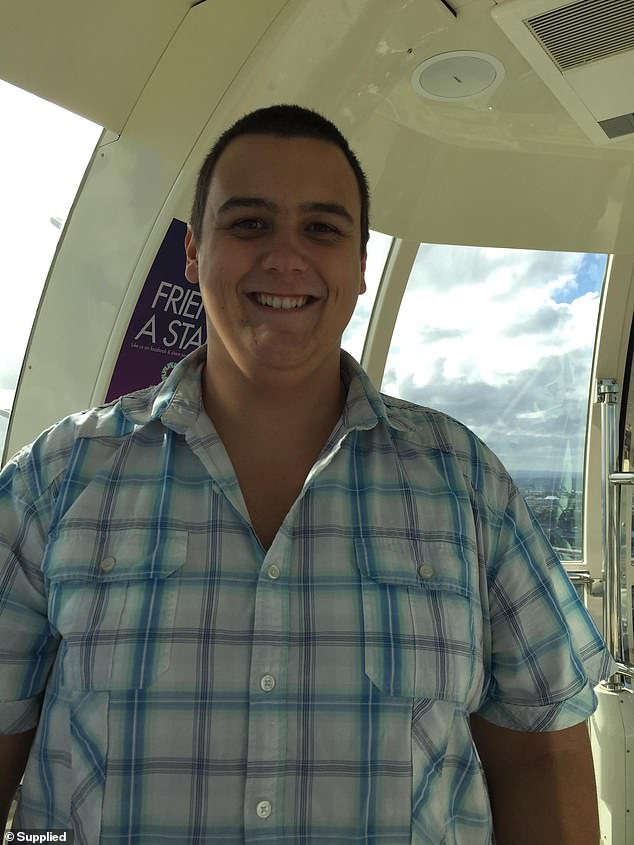 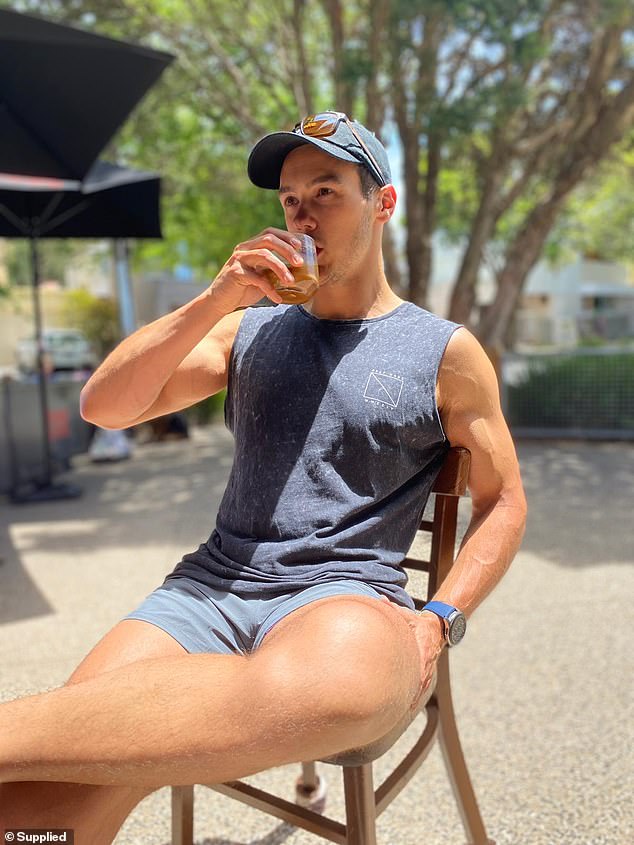 Four years down the track, he still goes to the gym and and eats healthily.

He now weighs 86kg and is happy with his new lease on life.

He eats a three-egg omelette for breakfast every day and chicken and rice for lunch during the week.

‘I don’t mind eating the same thing every day, I like meal prepping and sometimes I mix it up a bit with kangaroo or salmon instead of chicken,’ he said. 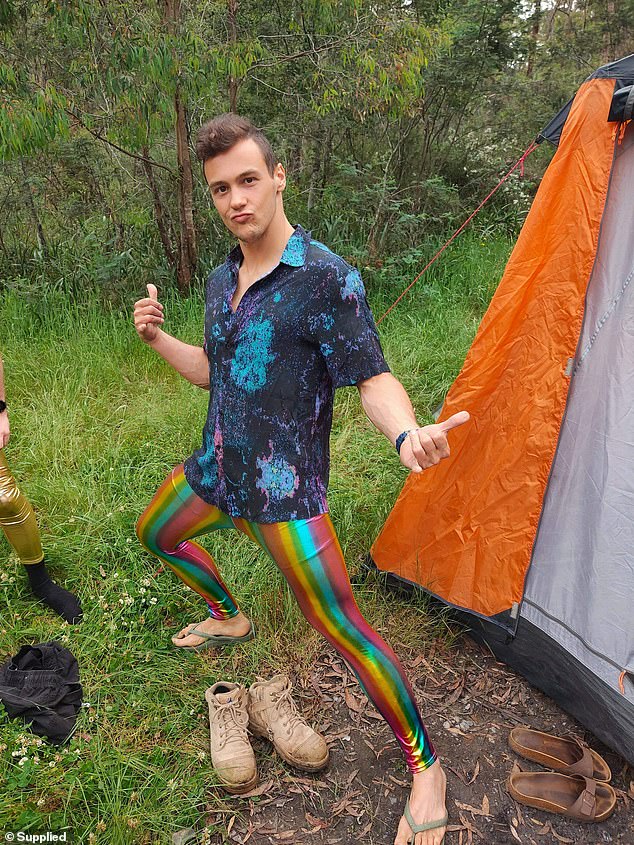 He now snowboards – a hobby he could never have tried if he had continued to be obese.

And while he still isn’t as confident as he would like to be due to the loose skin on his stomach, he is learning to be.

‘At the moment I am building muscle and I can already see it filling out some of the skin,’ he said.

He follows people with loose skin on Instagram to help him with his confidence and now feels he can take his shirt off at the beach.

He has looked into surgery to remove the skin but has decided to try to continue to gain muscle before making a decision about going under the knife. 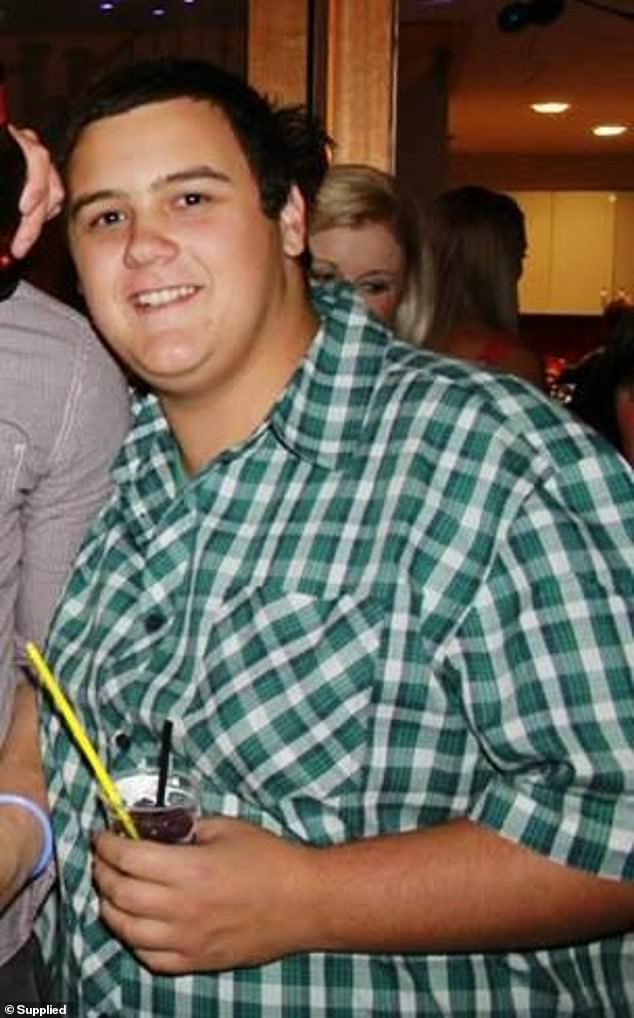 He is now the fittest person in his friendship group, and his family

Aaron said cold turkey worked for him but he’s seen many people jump on and off the bandwagon.

His biggest piece of advice for those wanting to lose weight is to start off small.

‘Do little things like swapping Coke for water and then it isn’t as hard,’ he said.

The 28-year-old also thanked his family and friends for their support throughout his weight loss journey.

‘They are all proud of me, I went from being the biggest, most unfit person in my family to being the fittest,’ he said.

What does a day on a plate look like for Aaron Hickey?

This plan consisted of five meals each day:

Breakfast: Coffee and a bacon and egg roll

Drinks: One litre of Coke