A mother-of-two has showcased her incredible five-stone weight loss which she achieved in just seven months without exercising.

Kayleigh Janek, from Reading, Berkshire, said she had never been happy with the way she looked and lacked confidence.

The 33-year-old, who works as an assistant accounts manager, has a condition called polycystic ovarian syndrome (PCOS) that affects the way her ovaries work and has meant that her weight has fluctuated for most of her life.

But after being ‘disgusted’ at a recent picture of herself during a family trip to the beach Kayleigh, who was 15st 4lb and a size 18, decided to do something about it and joined Slimming World a few days later.

She has since lost an incredible five stone and now weighs 10st 4lb and is a super svelte UK size 10. 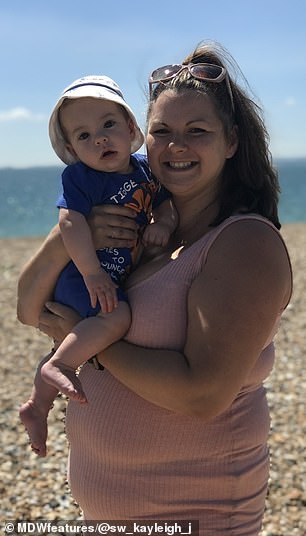 Kayleigh, who is mother to nine-year-old Mischa and one-year-old Tommy, had often opted for easy to grab and make meals to keep her energy levels up through the sleepless nights that come with a new baby.

Before her weight loss, Kayleigh said she did not exercise and consumed around 3,000 calories a day which consisted of a pastry and iced coffee for breakfast, a foot long Subway sandwich with a cookie and fizzy drink for lunch, and an oven pizza for dinner and a large bar of Lindt chocolate as a snack.

But now, following an overhaul of her lifestyle, she has a yoghurt and fruit for breakfast, a tortilla wrap pizza with salad for lunch, and steak with chips, coleslaw and blue cheese sauce for dinner – totalling 1,300 calories.

Kayleigh said that she was able to lose the five stones simply by controlling her calorie intake and did not exercise during her weight loss journey. 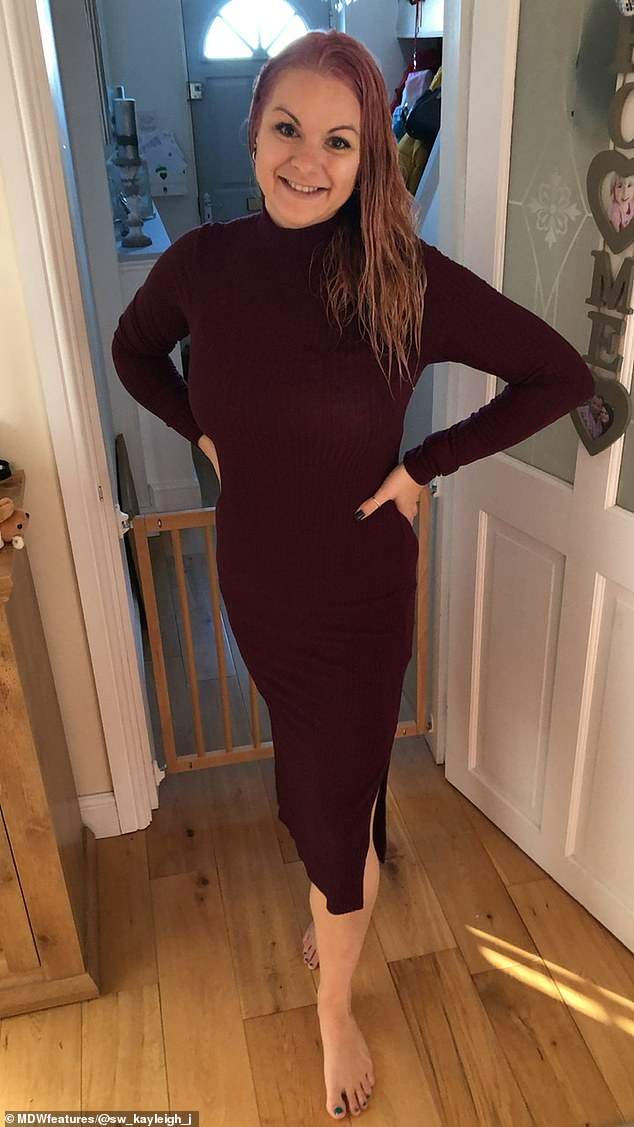 Kayleigh (pictured after) now loves what she sees in the mirror and her PCOS symptoms of mood swings, skin outbreaks and cramps have disappeared 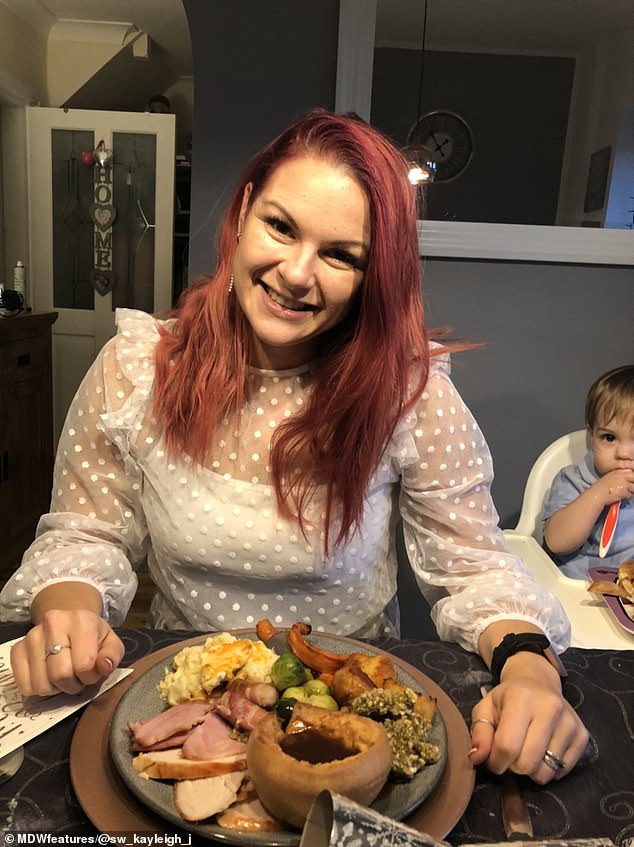 Kayleigh (pictured after) following an overhaul of her lifestyle, she has a yoghurt and fruit for breakfast, a tortilla wrap pizza with salad for lunch, and steak with chips, coleslaw and blue cheese sauce for dinner – totalling 1,300 calories

KAYLEIGH’S DAILY DIET BEFORE AND AFTER

Lunch: Foot-long Subway sandwich with a cookie and fizzy drink

But admitted she does now enjoy some light workouts such as hula hooping a few times a week.

Kayleigh now loves what she sees in the mirror, she has more energy to play with and home-school her children whilst she is working from home and her PCOS symptoms of mood swings, skin outbreaks and cramps have disappeared.

‘I’ve never really been happy with the way I looked.

‘I lacked confidence and was insecure,’ said Kayleigh.

‘I was exhausted, had no energy, and sleepless nights with a newborn were difficult. I’d rather stay home than face the world.

‘In May 2020, after lockdown was eased, we went to the beach, my husband took a photo of me and it was the moment I said enough was enough.

‘I was disgusted. I instantly wanted to cover myself up and go home. I joined Slimming World a few days later.

‘With returning to work in September looming after my maternity leave, I knew I didn’t want to return the way I was.

‘I didn’t want stares or people talking about how big I’d got. 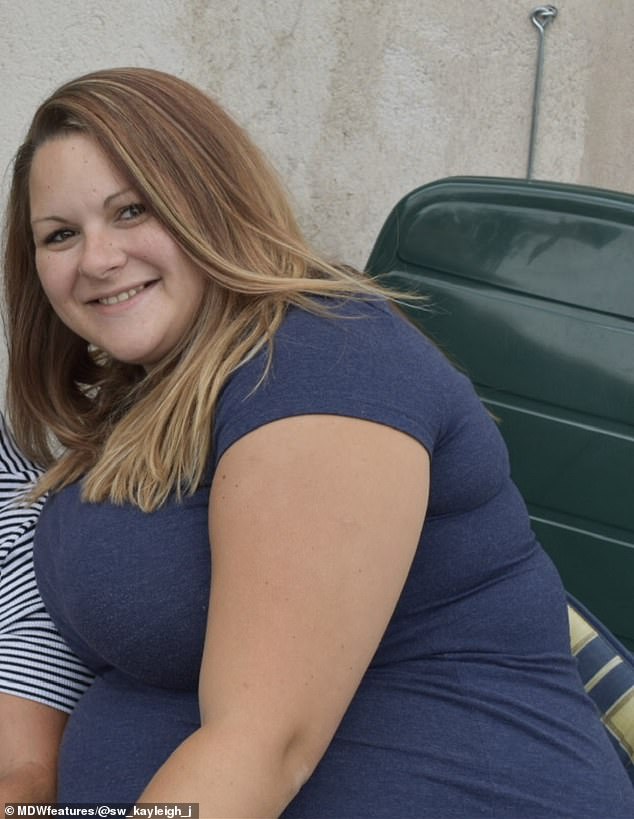 Kayleigh (pictured before), who is mother to nine-year-old Mischa and one-year-old Tommy, had often opted for easy to grab and make meals to keep her energy levels up through the sleepless nights that come with a new baby

Kayleigh (before, left, and after, right) said that she was able to lose the five stones simply by controlling her calorie intake and did not exercise during her weight loss journey

‘It was a little daunting having to join Slimming World in lockdown via Zoom, on a screen with people I’d never met but I was ready and willing to try.

‘I chose Slimming World as it’s not a diet but a change of lifestyle and that’s what I needed.

‘As the weight dropped off, I started to feel like I could really do this. I didn’t have a lot of faith in myself at the beginning, but week by week the weight came off and it made me believe in myself more and more. 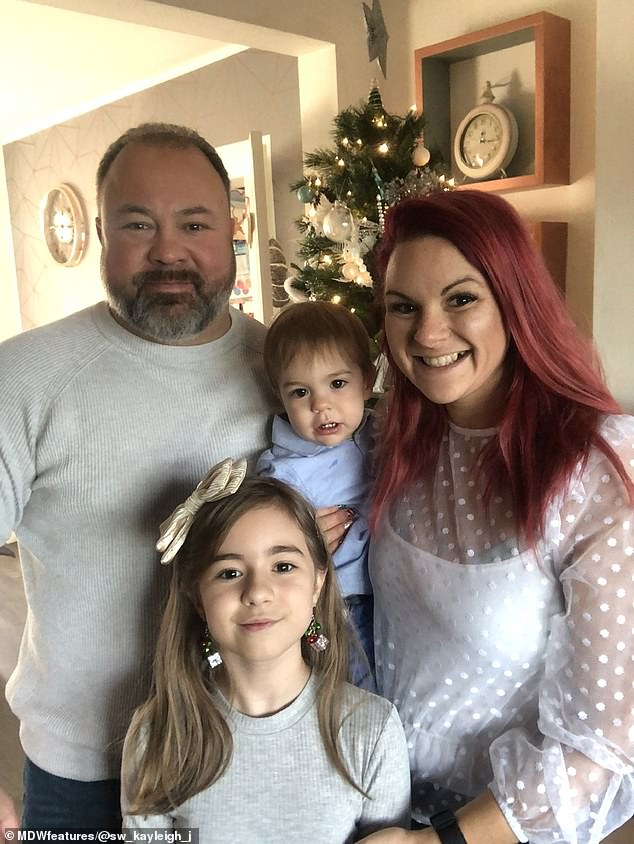 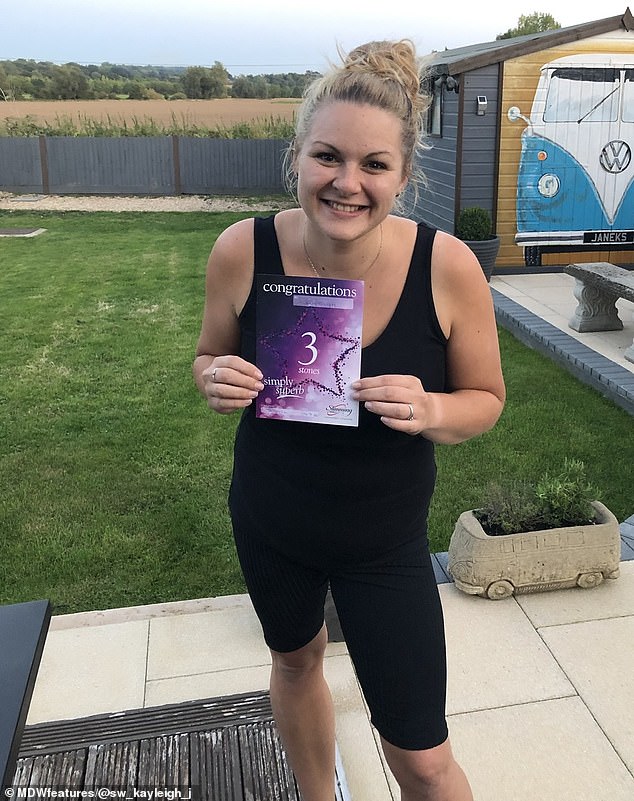 ‘My family now benefit from a healthier lifestyle. We enjoy more meals now as a family than we ever have done.

‘I’m happier, more confident, and I want to get out there in the world rather than shut myself off.

‘The biggest benefit has been my PCOS symptoms which have completely diminished. I no longer have skin outbreaks, mood swings and severe cramps.

‘I feel like myself again. I feel like I’m not just a mum and a wife but I’m me.

‘I still feel a little bit shocked by my reflection every time I see myself in the mirror.’ 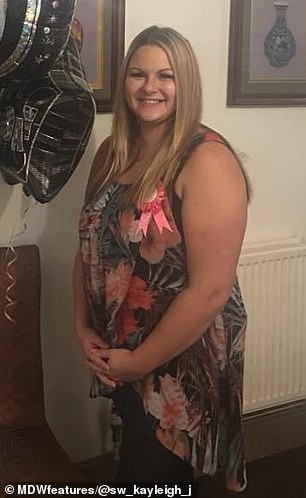 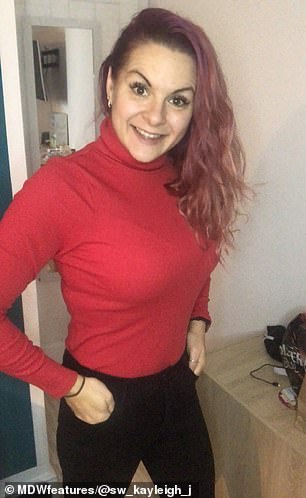 Kayleigh (before, left, and after, right), who has lost five stone in seven months, said that she does now enjoy some light workouts such as hula hooping a few times a week 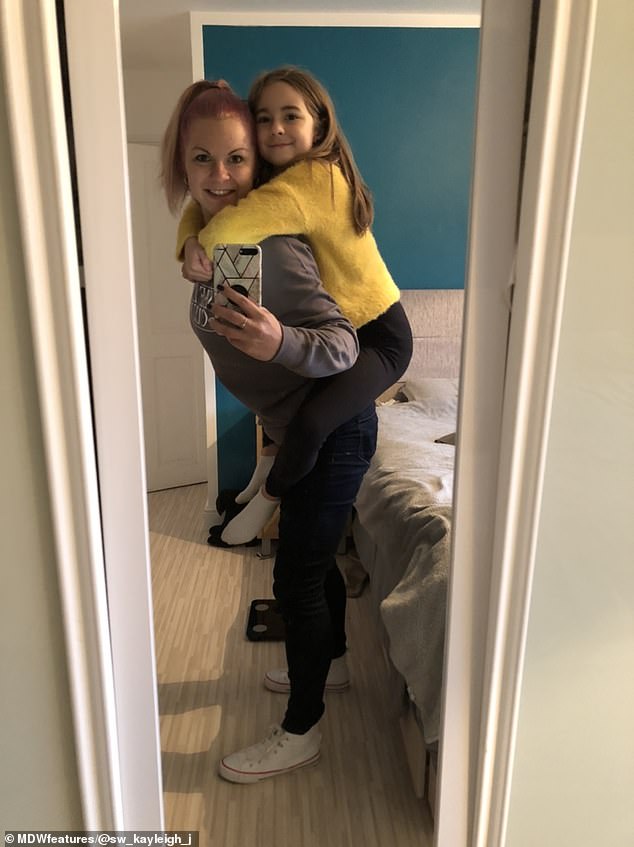 WHAT IS POLYCYSTIC OVARY SYNDROME?

Polycystic ovary syndrome (PCOS) is a is a hormonal disorder that causes enlarged ovaries with small cysts on the outer edges.

Women with PCOS may have infrequent or prolonged menstrual periods or excess male hormone (androgen) levels.

The three main symptoms are:

Fertility may also be affected.

The exact cause of PCOS is not known but insulin resistance caused by a highly refined and processed diet is believed to be one of the biggest triggers.

PCOS can be managed through diet, the contraceptive pill and other oral medications.

Kayleigh went back to work in September 2020 after her maternity leave and her colleagues said she was unrecognisable and even told the mother-of-two that she had inspired them.

She said the comments had filled her with pride and make the hardest part of her weight loss journey worth it.

‘My diet now consists of fruit and veg with every single meal, but I still enjoy a low calorie sweet treat in the evening,’ she said.

‘I didn’t exercise to lose the weight, but I actually enjoy some light exercise now that I’m smaller and have more energy.

‘The hardest things about my journey was saying no to things I wouldn’t usually think twice about putting in my mouth.

‘It was also hard to find clothes for my new figure with Covid, lockdown and shops being shut I had no idea of my new clothes/bra size so I had to guess.

‘I’ve had some work colleagues say they didn’t recognise me. I’ve been told I look amazing and that I’ve inspired them.

‘I’ve had nothing but lovely, kind and supportive comments from everyone I know.

‘I never set out to inspire people but it’s the biggest compliment I think I could have.

‘Surround yourself with family and friends that are going to support you – you don’t realise how much of an effect the people around you can have.

‘Maybe even find a friend that wants to join you so you can support each other.

‘Do your research and find a diet and lifestyle that is right for you.

‘If you feel like you are going to be deprived, you won’t enjoy it and won’t be able to stick to it.

‘If you have a bad day, draw a line and start again the next day, don’t let a bad day turn into a bad week.’