A mother has finally shared a proper hug from her six-year-old daughter for the first time after losing 6st in as many months.

Carla Ford, 33, from Edinburgh, Scotland, ballooned to 16st after gorging on a diet of Greggs sausage rolls, biscuits and vanilla lattes for nearly a decade.

But when she went for a routine check-up at her GP surgery last March, the mother-of-three was warned that she was on track to developing type 2 diabetes.

The trainee midwife was devastated by the projected diagnosis and was prescribed anti-depressants to help her cope with the news of the health scare.

Four months later, Carla decided to shift the weight and switched to a low carbohydrate keto diet, which saw her cut out foods including bread, fruit and sugar. 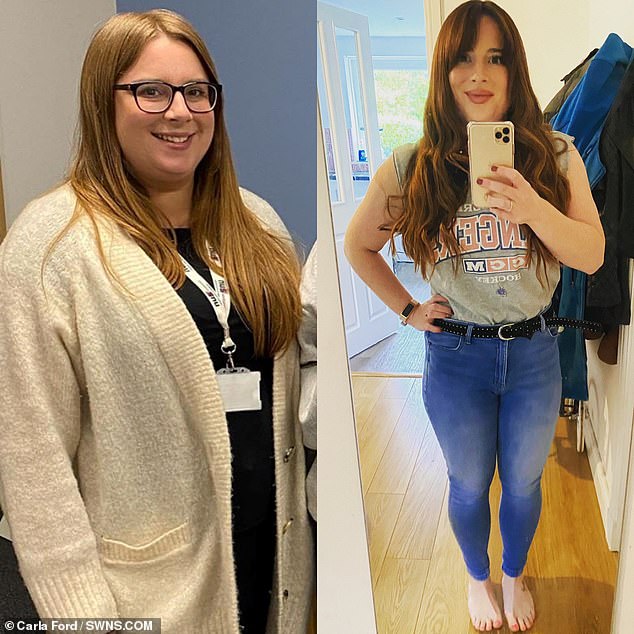 She explained: ‘I just feel so much better for it all. I’ve tried so many diets over the years and seen my weight yo-yo but nothing has actually stuck.

‘This has and I’ve never felt better mentally or physically.’

Carla dropped four dress sizes in just six months after the health kick and reversed her path to diabetes, while she has also reduced her symptoms of polycystic ovary syndrome (PCOS), which is a condition that affects how the ovaries work.

Carla, who now weighs just 10st and is a size eight, said her remarkable weight loss finally hit home when her daughter Florence wrapped her arms around her for the first time.

Speaking about the touching moment, she explained: ‘When my little girl was able to wrap her arms around me it really brought it all home. She said “Mummy, my arms can touch one another now”.

‘It’s things like that which I never would have realised before but are obviously impacting her.’ 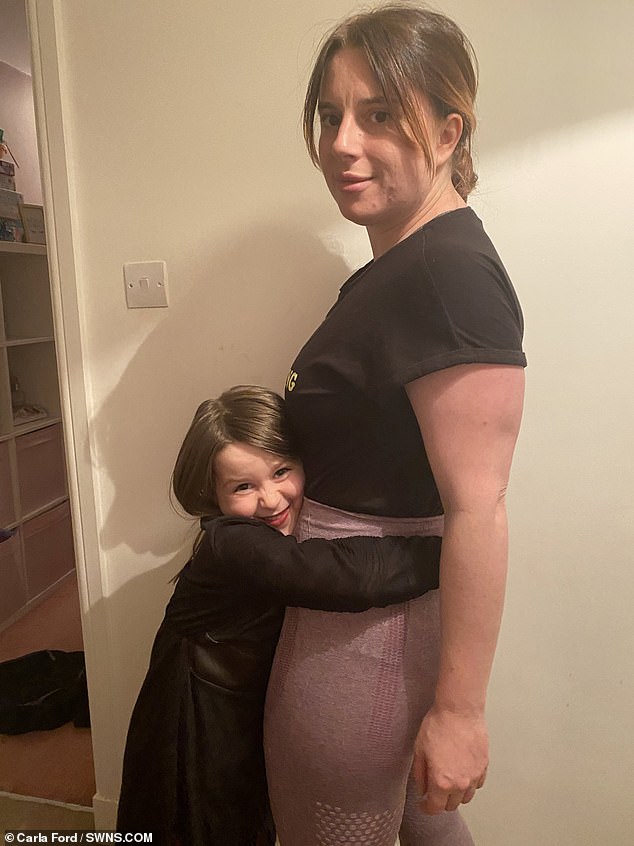 Carla, who now weighs just 10-stone and is a size eight, said her weight loss finally hit home when her daughter Florence, six, wrapped her arms around her for the first time (above) 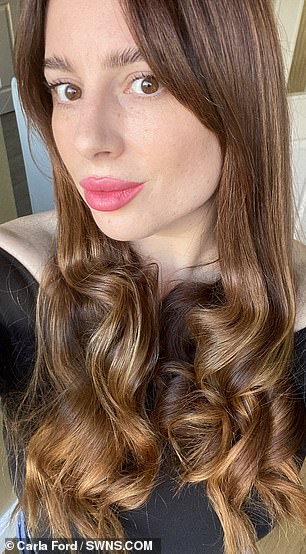 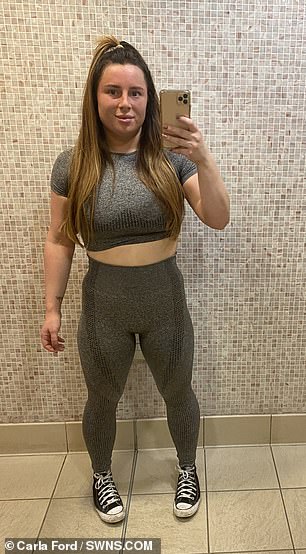 Carla admitted that she got into a habit of binge eating after becoming a mother, while also juggling a part-time job and returning to college to get the grades she needed to become a midwife.

But she said it was her prognosis of type 2 diabetes that ‘hit home’ with Carla and saw her become determined to change her weight and lifestyle.

Carla said: ‘I was always brushing my weight under the carpet.

‘Truth be told I was so unhappy with how I looked. I would be in tears with how I let myself get.

‘So much so that I used to wash my hair twice a day to make sure it looked nice because that was the only thing I could instantly fix.

‘Now I feel so good I’ll be lucky to wash my hair twice a week!

‘I was just binge eating due to the stresses of everyday life. I had no time for me but when it was midway through the lockdown I thought, what with the health scare, if I don’t do something now it’ll never change.’

CARLA’S DIET BEFORE AND AFTER WEIGHT LOSS

Snacks – Crisps and biscuits all day throughout the day alongside half a dozen vanilla lattes.

Carla began walking more before signing up to the gym and getting a personal trainer, which saw her drop an impressive five stone.

But she claims the weight loss has helped her with her symptoms of poly-cystic ovary syndrome, which include excessive hair growth, weight gain, hair loss and acne.

Carla continued: ‘I was walking a lot more, then I signed up for the gym and in November after losing five stone I started with my personal trainer.

‘I completely overhauled my diet and the first four or five days were really tough as it’s a shock to your body.

‘But after a few months I noticed I was losing all the symptoms of my PCOS. The horrendous skin cleared up along with the excess facial hair and the feeling of being constantly hungry had also reduced.’

Now at her ideal weight of ten stone, Carla says her weight loss has also enabled her to fulfill her dream as a midwife, which she is currently training for at Edinburgh Napier University.

Speaking about her new career path, she explained: ‘I also didn’t want to be doing a job where my weight would bring me down.

‘I didn’t want to be unfit while doing a 12 hour shift. 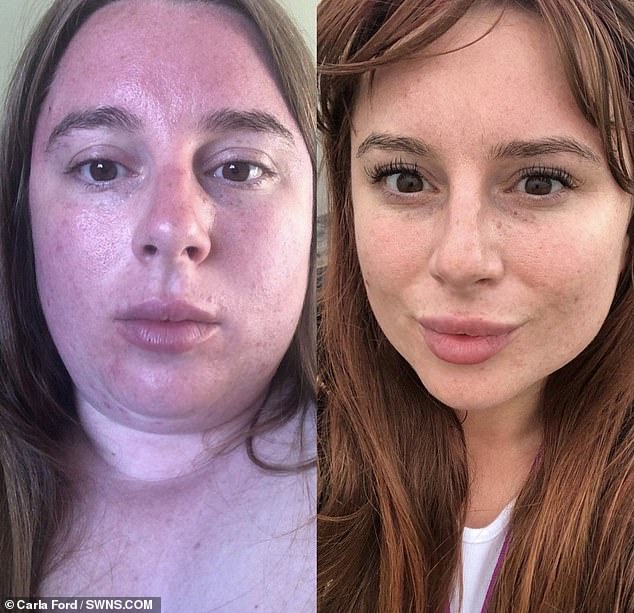 Carla claims her weight loss (L-R: before and after) has helped her with her symptoms of poly-cystic ovary syndrome, which include excessive hair growth, weight gain, hair loss and acne 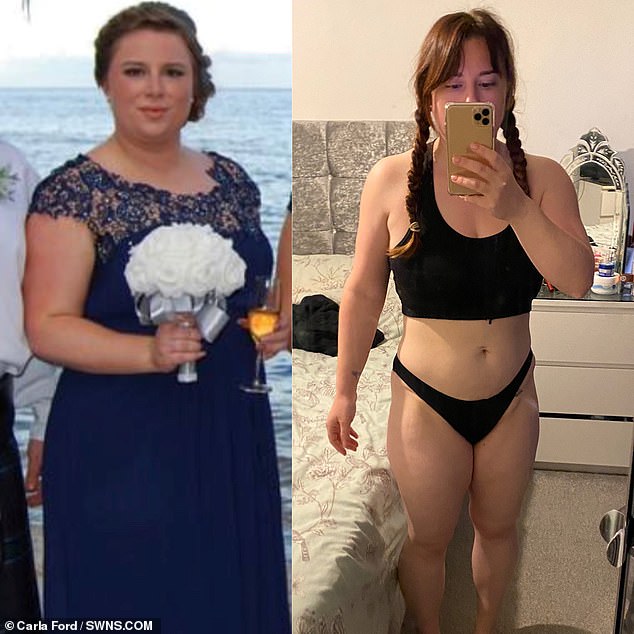 Now at her ideal weight of 10st (right), Carla says her weight loss has enabled her to fulfill her dream as a midwife, which she is currently training for at Edinburgh Napier University

‘I worked hard for four years as a mature student to get the grades I needed to get my place in university while juggling three children.’

Carla claimed that adopting the keto diet ‘saved’ her life and she insisted that she will ‘never’ go back to her lifestyle from before her weight loss.

She added that she is receiving regular blood tests from her doctor to make sure that her body remains healthy and is working as well as it should be.

She continued: ‘There has been a lot of attention on keto recently on social media, saying that’s it’s unhealthy and unsustainable but for me it’s genuinely saved my life.

‘I won’t ever go back to eating the way I did before now that I know what works for my body and the vast benefits I’ve had from reducing my carb intake.

‘I’m receiving regular blood tests from my doctor to ensure my body is working as it should with my new lifestyle and I truly believe that nutrition can help with so many issues that normally just have medication thrown at them.

‘I just feel now with another lockdown popping up I can hope to inspire others and hopefully help motivate someone else who might be feeling how I was out of their depth and helpless.’

Carla now tracks her fitness and food regime on her Instagram account @mrsfgoesketo  and hopes to inspire others with her weight loss journey.