A carer who hit her 17st weight loss target during lockdown and dropped 12 dress sizes has been named Slimming World’s Woman of the Year.

Jenny Irons, 46, from Clacton-on-Sea, began her transformation back in September 2018 after seeing her weight steadily creep up following a marriage break-up, being made redundant and experiencing financial difficulties which resulted in her having to sell her home.

After signing up to her local Slimming World, while providing moral support to her sister Jackie, she has gone from 27st 5lbs to 10st 5lbs – losing her final 2st when the UK went into lockdown last year.

Now single Jenny, who has gone from a dress size 34 to a size 10, is keen to meet someone.

Scroll down for video 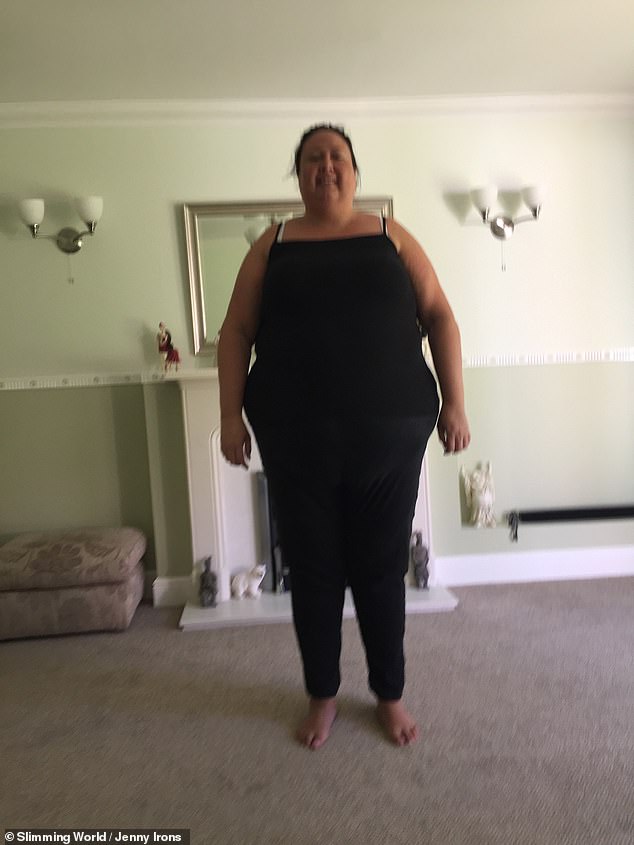 Jenny Irons, 46, from Clacton-on-Sea, began her transformation back in September 2018 after seeing her weight steadily creep up following a marriage break-up, being made redundant and experiencing financial difficulties which resulted in her having to sell her home 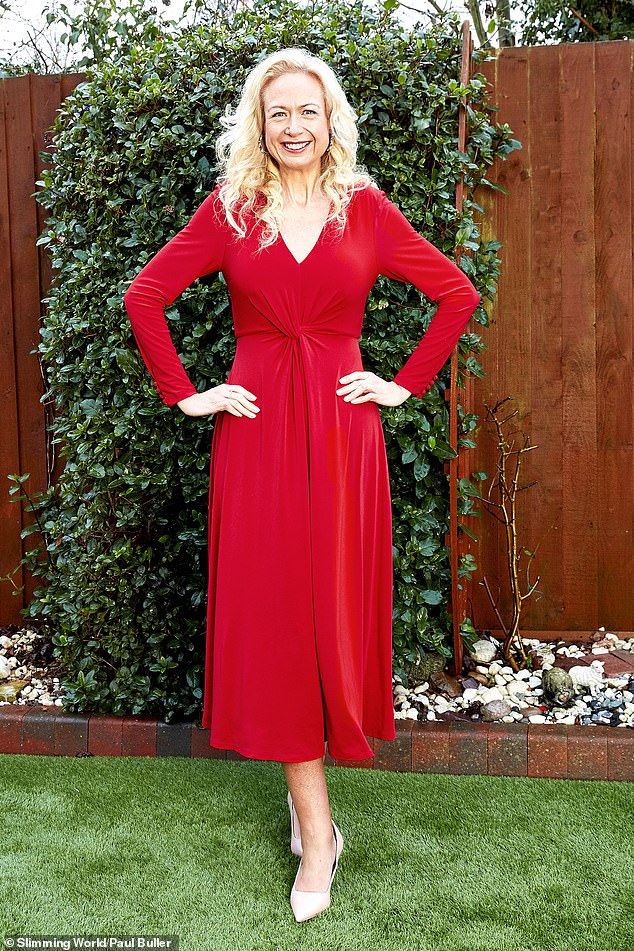 Jenny hit her 17st weight loss target during lockdown and dropped 12 dress sizes (pictured). She has been named Slimming World’s Woman of the Year

She said: ‘When I first joined Slimming World, I never thought I’d be here, 17st lighter.

‘Sometimes I have to pinch myself and, being named Woman of the Year is like the cherry on the cake – or should I say fruit salad! My only regret is that I didn’t do it sooner.’

Jenny’s weight had yo-yoed for decades but she turned to food for comfort while going through a particularly difficult time after splitting from her husband.

‘Things really got on top of me, the depression kicked in and I was in a really bad place,’ she recalled. ‘The only thing that made me feel better was food. I had absolutely no confidence.

‘I would go to the supermarket at 10pm at night or 5am in the morning so that no one would see me, I wouldn’t make eye contact with anyone and I hid my body in baggy clothes. It was a very lonely place.’

Weighing 27st 5lbs at 5ft 9in and wearing a size 34, her health also began to suffer as she struggled with chest and foot pain, experienced frequent headaches and would get out of breath walking even short distances. 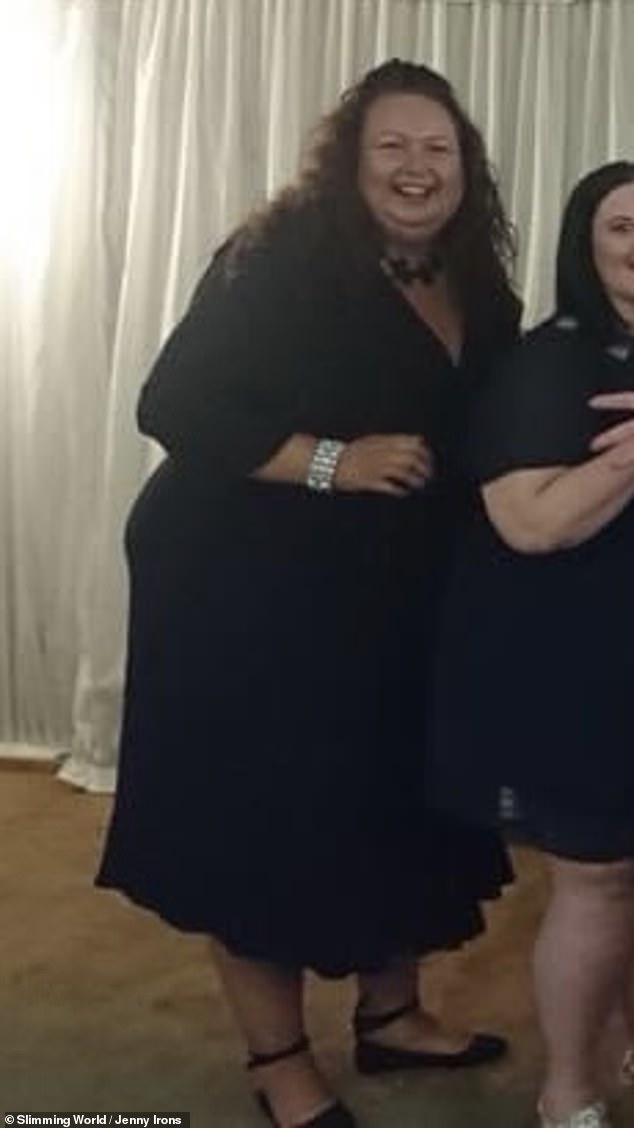 Jenny also suffered embarrassing incidents including once being unable to fit in a pub chair because of its arms.

She had tried a range of diets, from meal-replacement shakes to slimming clubs, in an effort to slim down, but nothing worked for her.

So, when Jenny went along to her local Slimming World group to supposedly support her sister, she had no faith that it would make a difference to her size.

However, as she learned about and started to follow the organisation’s Food Optimising eating plan, which enables members to satisfy their appetite and enjoy lower energy dense foods (those that are low in calories per gram) like fruit and veg, pasta, rice, potatoes, lean meat and pulses, without weighing, counting or measuring, she slowly began to change her mindset.

Jenny, who lives with her parents, gradually adopted new eating habits and her confidence in making healthier choices grew. 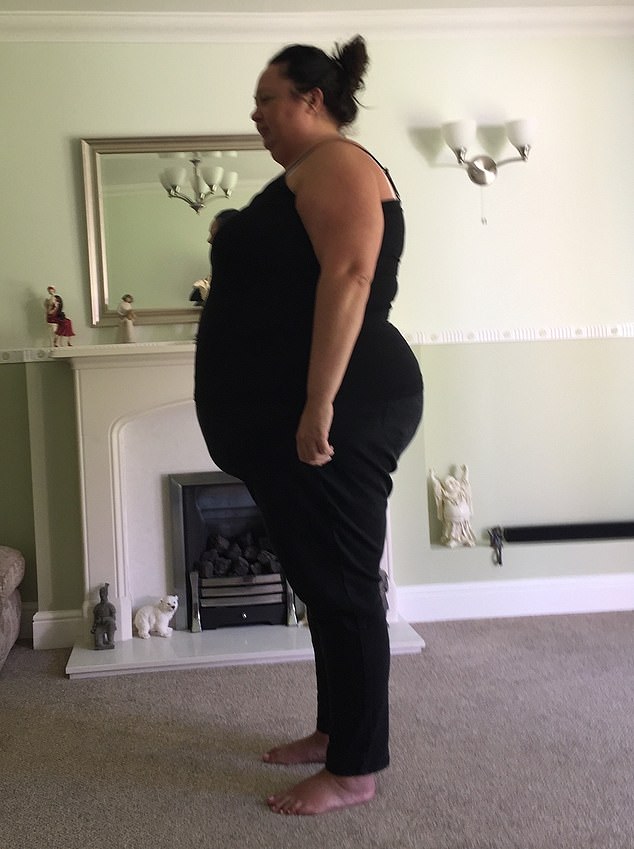 ‘I had absolutely no intention of getting involved. I was just trying to be a good sister,’ she admitted.

‘But months later I realised my sister had actually been the one joining to help me all along!’

She went on: ‘With the various diets I’d tried before, I really felt like I was on a diet and I hated the milkshakes – I want to be able to chew my food!

‘That’s what I love about about Food Optimising – you can still enjoy all your favourite meals like Spaghetti Bolognese or curry, just cooked in a different way and you don’t feel like you’re on a diet at all.

Lunch: Corned beef and pickle sandwich with another packet of crisps and a chocolate bar

Evening: Slice of cheesecake with double cream, half a bar of chocolate, a bag of peanuts and a family size bag of crisps and/or ice cream.

Dinner: Mushroom, bacon and onion omelette with salad or a Spaghetti Bolognese, followed by a fresh fruit salad

Evening: Fat-free yogurt and some popcorn.

‘Eating meals with people has always been a way of socialising for me, and – when we’re not in lockdown – I love that I can cook a delicious, healthy meal for my friends and family that we can all enjoy together.’

As the weeks went by and Jenny’s weight went down, she began to get excited about what she could achieve and her sister soon felt comfortable to stop attending the group with her.

Jenny recalled: ‘I was petrified when I first walked through the doors of the group, my head was swimming with questions; “Will I be the biggest one there?”, “Will the scales be able to take my weight?” “Will everyone ask me how much I weigh?”

‘Thankfully it was nothing like that at all. There were people there of all shapes and sizes and everyone was so helpful and friendly, and, most importantly, we were all there for the same reason. 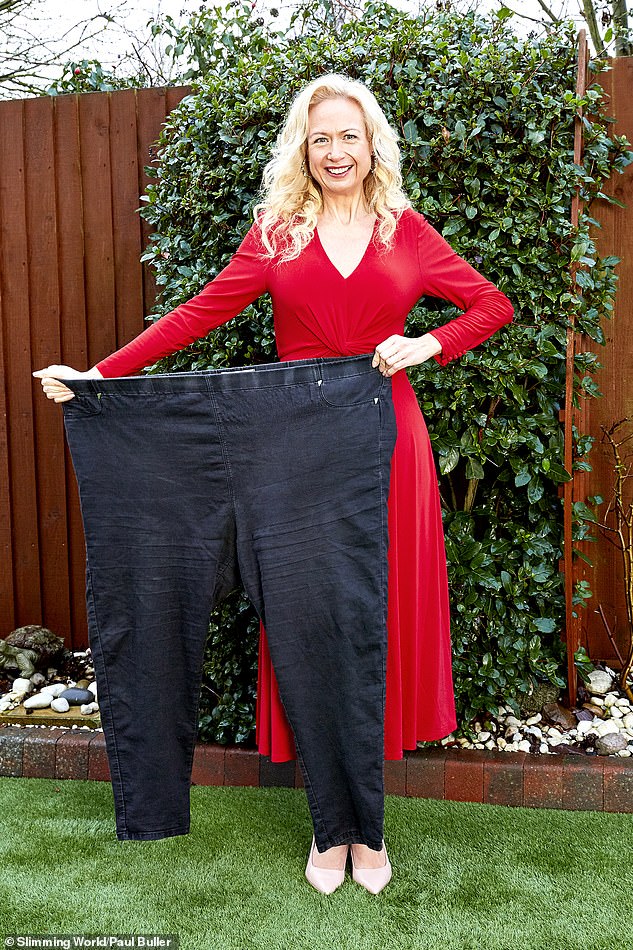 Now single Jenny, who has gone from a dress size 34 to a size 10 (pictured with her old jeans), is keen to meet someone

‘My group are like family now and my consultant, Carole, who runs the group, is wonderful – she genuinely cares and that makes a big difference.

‘There have been difficult weeks, where things haven’t gone how I’ve wanted and I’ve thought “What’s the point?” but the group have always been there to encourage me.

‘Without fail, I come away from the sessions with lots of ideas and strategies to overcome whatever challenge I’m facing because so many other people have been there before in their journey, and I’m left feeling much more positive about the week ahead.’

Jenny now feels able to share her experience and knowledge with other members to help inspire their confidence and self-belief.

After losing around 6st, Jenny, who has changed careers since losing weight and now works as a carer, was inspired by her fellow slimmers in the group to become more active and make it a regular part of her routine. 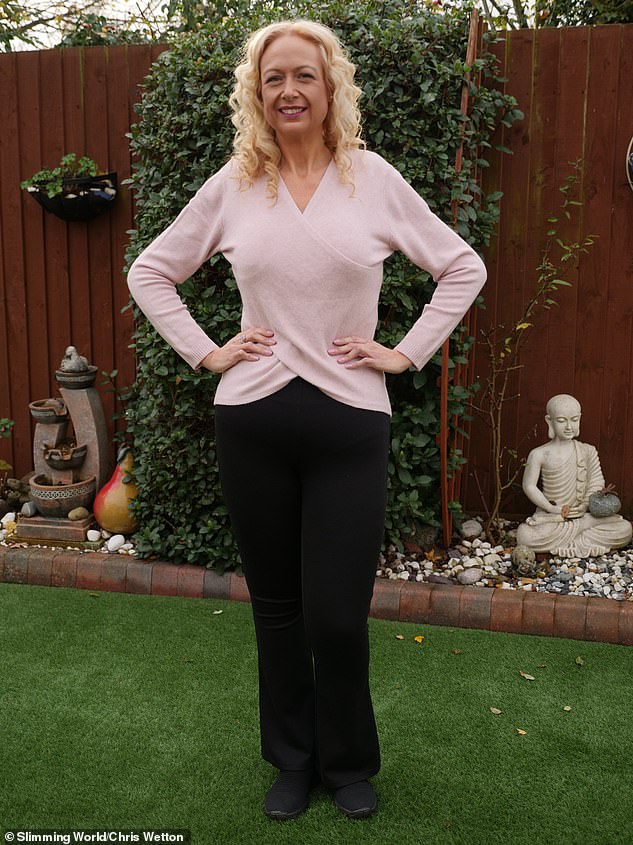 She explained: ‘I felt better in myself and had the confidence to start exercising.

‘Before, I only ever walked from my car to work – I was too scared to go any further, as I’d get out of breath easily and need to sit down.

‘Now, I can walk for miles and if I don’t go for a walk, I start getting itchy feet – I’m the new Forrest Gump! I’ve joined a gym to help tone up, too.’

During the first lockdown Jenny’s group sessions were held virtually, as they are again now.

Jenny embraced the change, continuing to sign in to weekly Zoom sessions with her consultant Carole Bloomfield and fellow members.

‘With the continued support I just kept focused and concentrated on my goals, and I’m so pleased I did,’ she said.

‘I lost 31lbs in the first lockdown and reached my target weight of 10st 5lbs. My BMI has gone from 54 down to 22, I’ve swapped my size 34 clothes for trendy size 10s, and I just can’t stop smiling.

‘And now I am at my slimmest and happiest my ambition is to travel the world and do some great adventure holidays that I would never have been able to even dream of doing before.’