Years ago, when we were being harassed by an odious woman with frivolous litigation, , then in his late 80s, and I had a particularly trying morning at the Kurla magistrate’s court where we awaited our fate on a bench infested with bed bugs. As we returned to the office, the stress of the day took its toll and his knee jammed, temporarily paralysing his lower leg. Tottering on impractical heels, I rushed forward to stop him from falling, only to go flying flat on all fours with him.

The day’s ignominy was complete.

As consolation for my failed chivalric attempt, Dr Watsa sent me a colourful silk scarf that evening. It was also his way of suggesting how a nice gesture and a dash of jauntiness can go a long way in making an unpleasant day better. Not unlike the advice he dispenses on the pages of this newspaper. For 15 years without fail – seven days a week, 52 weeks of the year – Mahinder Watsa has responded to the tortured queries of thousands of readers with patience – endless, endless amounts of it – and with clarity, humanity and wit. (To an anguished teenager’s query whether repeated masturbation will reduce the size of his organ, Dr Watsa’s bracing response: You talk every day, has your tongue become smaller?).

The city’s most popular sexpert, Dr Mahinder Watsa passed away on Monday morning, aged 96. Watsa was famous for his work as a columnist with Mumbai Mirror, where he wrote the column Ask the Sexpert, and educated, as well as entertained his readers with witty replies.

Many of these questions and answers from the column that has now acquired cult status can be found in Dr Watsa’s first-ever book, an essential read, published in 2015, called It’s Normal!

Though he was born in Calcutta, Dr Watsa grew up all across then-undivided India. His father was a medical researcher in the British army who worked on developing the plague vaccine at Haffekine Institute. His postings took them to, among other places, Calcutta, Lahore, Mhow, Rangoon (now Yangon). It’s from Rangoonthat he recalls one of his most profoundly affecting memories. The Watsa family had been invited to a sit-down dinner at the Royal Palace. He must have been 10 or 11, and seated at the far end of the long and impressively-laden table. “I felt something very soft on my feet and so I peeked under and saw this most amazing sight: there were scores of young girls sitting at the feet of every guest on that long table swishing their very long hair to fan the guests’ feet and keep off the mosquitoes.” 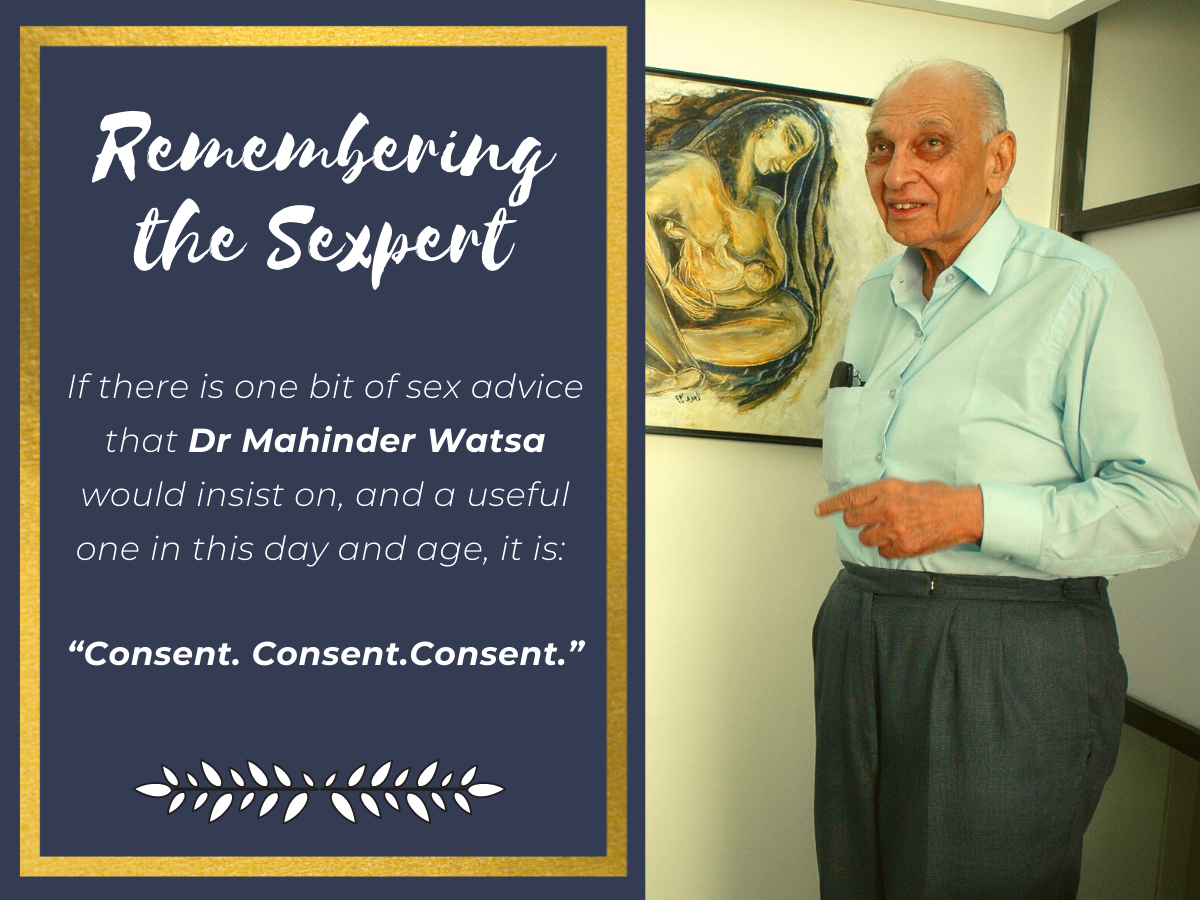 Quite how that sight impacted him he does not say, but as a doctor, he chose to specialise as an ob-gynec. In the course of his practice, he often ended up playing counsellor to pregnant women, listening to their problems with the menfolk, tackling cases of marital and child sexual abuse, which prompted him to diversify into the then unchartered field of sex therapy.

It began, he says, his eyes ever-alert and twinkling, on a bum note. Instead of a sex therapist, the painter who had been called to create a new signboard at his Bandra clinic, wrote: Dr Mahinder Watsa, sex the rapist.

Well, he has been that, in properly conjoined capacity, for 55 years. India’s very own Masters and Johnson, her unerring Shere Hite. It’s easy to get distracted by his witticisms and forget the path-breaking work he has done in the field of sex education – introducing it as part of the Family Planning Association of India when it was led by the formidable Mrs Avabai Wadia, producing scores of field studies year on year, training generations of sex educators, producing manuals on sexual hygiene, and of course, through his work in the media. Talking of manuals, he says, “I think the Khajuraho temples, certainly their outer walls, may well have been originally built as sex manuals. For whom though, we don’t know.”

In 2005 when I invited Dr Watsa to do the column for the newly-launched Mirror, we had the briefest of discussions on the telephone: We agreed to keep readers’ identity anonymous, to not asterisk words like vagina and penis, instead refer to them as any other body part and keep the answers short.

I pushed my luck: Could he do it as a daily?

In the Mirror alone, on a back-of-the-envelope calculation, he would have answered about 20,000 readers’ queries. Through his career as a sex counsellor, it would be over 40,000. This excludes the patients whose lives he has touched more intimately.

The need and the importance of someone like Dr Watsa comes from the Indian state’s continuing prudish reluctance to introduce sex education in schools and colleges. Very often, outlandish questions that afford vast amounts of amusement to savvier readers can be deeply tragic.

An instance that did not make it to the newspaper then was of a 20-something man who wrote to him saying that, inspired by the famous childbirth scene in 3 Idiots, he had taken a vacuum cleaner to his girlfriend’s vagina after having unprotected intercourse with her, in the hope that the semen could be suctioned out. Instead, it damaged her organs and she died from internal haemorrhage. What had he done wrong, the man had wanted to know.

Why does sex, a natural and strong instinct, often leave us at such odds? (I have been witness to men, well past middle age, at Willingdon Club rendered foolish and inarticulate as they talk to him only by raising their eyebrows and saying in that nudge-nudge-wink-wink manner, “Hey doc, heh huh!?” while Dr Watsa will speak in fully-formed sentences like, “Hello, how are you?”).

“It’s because in the sexual act we want to come across as perfect,” he now says. “It comes down to all about self-worth.” Which is why people are so fascinated by pornography and having less and less intercourse with another person, he adds. “Sex these days is also being ‘medicalised. There is Viagra that ensures instant erection, emergency I pills that promise instant abortion plus all that information on the internet – sometimes people come to me mentioning illnesses or symptoms they have which they’ve read on the internet, that even I don’t understand.” While on the one hand sexual gratification has become easier and instant, the caring and sharing required to nurture more fulfilling relationships that create fuller lives has evaporated. It is an essential view but may well be an old-fashioned one.

If there is one bit of sex advice that Dr Watsa would insist on, and a useful one in this day and age, it is: “Consent. Consent.Consent.”

Once he was asked by a “32-year-old happily married man from Karjat” if it was OK to cheat on his wife with his goat named Ramila. “Over the past two months, I have been thinking about how it would feel to make love to her. Is this normal? Will I contract a goat-related STD? Please help!” he wrote.

Aside from mentioning that bestiality was considered abnormal and illegal in India, this is what Dr Watsa had to say: Do ask Ramila whether she would like it.

THE BEST OF WATSA

Q. I am 16 and a half years old, and my penis is 4.3 inches long, 1.5 inch thick (when erect). When not, it shrinks to 1 inch in
thickness. I have not grown a beard yet or developed muscles. I have experienced weight loss recently too. Am I developing signs of puberty? Why is my penis short?

Stop sounding like a tailor. Leave your genitals alone and focus on daily exercise and a healthy diet. The genitals will look after them? selves. You are already in your puberty years.

I am 18 years old and my testicles are larger than those I see in films. Should I be wearing a supporter all day long?

Do you watch movies with a ruler in one hand? Then why not measure ears and other parts of the body as well. If you have any doubt, see your doctor.

I am a 22-year-old man. When I was 19, I suffered from jock itch, which was cured. However, since then, the region around my penis and inner thighs has remained dark. Now, my girlfriend and I want to have sex for the first time, but I am embarrassed to get naked in front of her. I have a fair complexion, but my groin region looks ugly. What should I do?

You need to make sure that your girlfriend is not looking at your crotch, but is tenderly looking into your eyes and is excited about your touch and sweet talk.

After having sex four times a day, I feel weak the next day. For about five minutes, my vision goes blank and I can’t see anything properly. Please help.

What do you expect? Shouts of hurray and I am a champion all over town?

My family is demanding that I get married. How can I ascertain if the girl is a virgin?

I suggest you don’t get married. Unless you appoint detectives, there is no way to find out. Spare any poor girl of your suspicious mind.

There are no angels to carry your sperms to the person you are dreaming about. Fantasy gives you enjoyment, but does nothing more.

This profile was first published in July 2015

Why Every Judge On Top Investor Show Backed This £1.95 Product

Ingredients, Benefits and Where to Buy PhenQ

The silent heart disease that is killing dogs