A woman whose weight ballooned to 27st when she turned to comfort-eating after the sudden death of her 21-year-old daughter, has shed 12st with life saving surgery.

Amanda Smith, 49, who lives in Belper Derbyshire, began eating gigantic portions of food while suffering from post traumatic stress disorder following the death of her daughter Paris from a heart attack.

Children would call a ‘fat s***’ on the street while other women sniggered at her size 34 frame on the treadmill when she briefly joined the gym – forcing her to go home, open a tin of biscuits and vow to never go back.

Becoming housebound and suffering 40 asthma attacks a day, the insurance advisor feared she’d only have two years left to live after gaining six stone in 18 months. 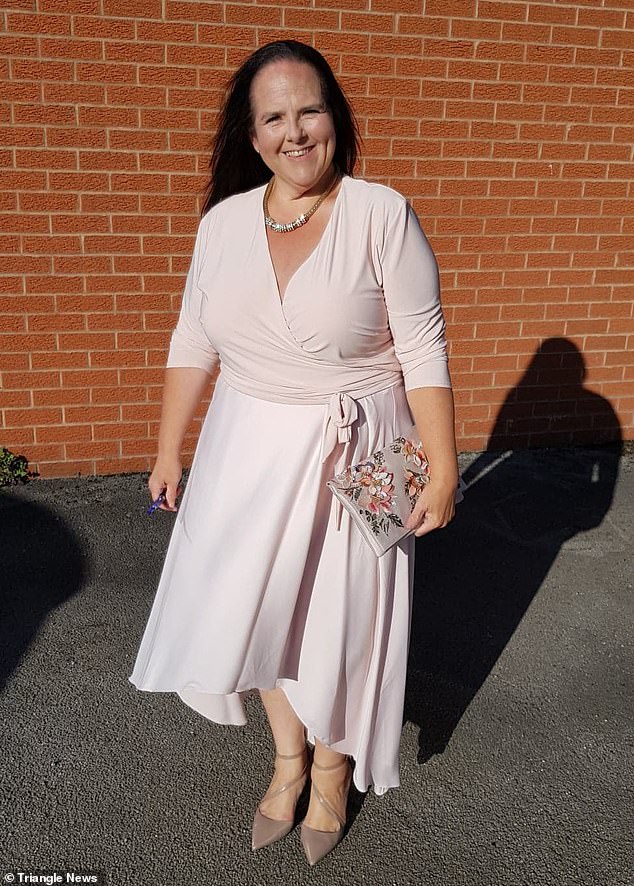 Amanda Smith, 49, (pictured) who lives in Belper Derbyshire, said she stopped caring about herself and began eating gigantic portions of food after the death of her daughter Paris 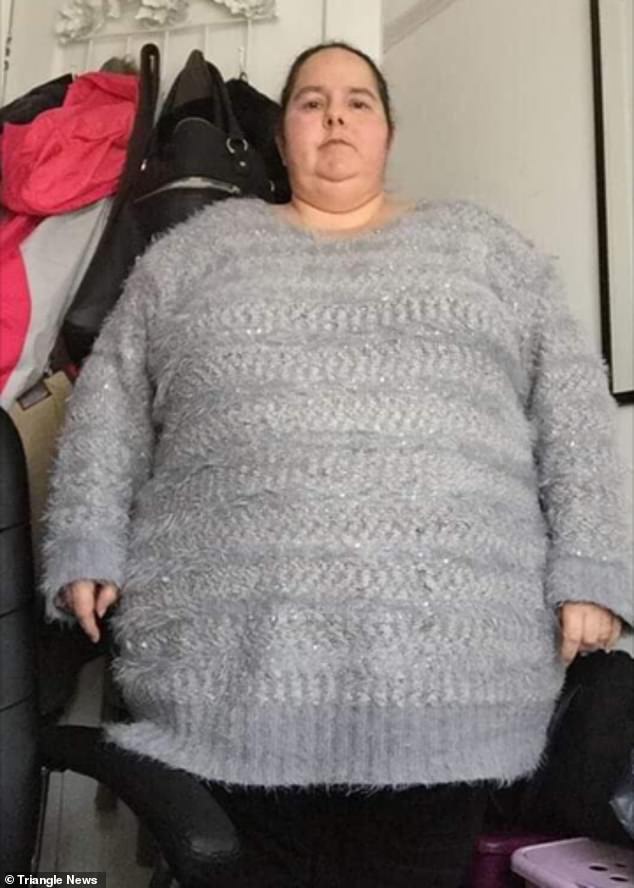 Amanda who wore a UK size 34 and weighed 27 stone at her heaviest (pictured), said other women would mock her in the gym 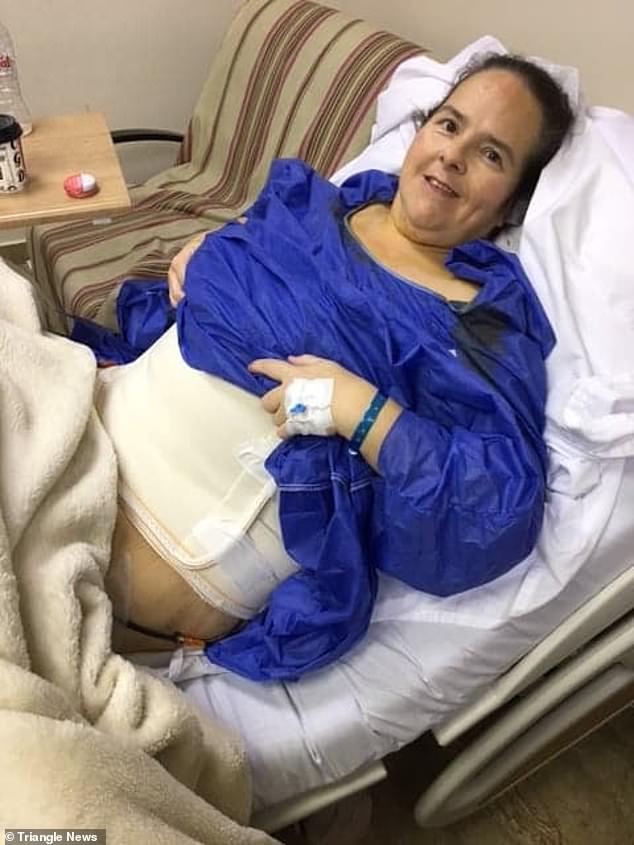 Fearing she had just two years to live, Amanda paid £11,900 for a gastric sleeve surgery and tummy tuck. Pictured: Amanda after her tummy tuck

But, Amanda has now lost almost half of her body weight and dropped to a size 18 from a 34 after using her house deposit savings to spend £11,900 on a gastric sleeve surgery and a tummy tuck.

And since the huge weight loss, Amanda finally found the courage to marry engineer Alistair, 40, who she’d been with for 15 years.

Amanda said: ‘After losing my daughter I no longer cared about myself and I started eating gigantic portions of food. I would never ever get full. Losing Paris left me broken.

‘Food became my comfort. I’m only 5ft2 and my husband is 6ft3 and I would eat twice as much as him. I would even have a packet of digestive biscuits for breakfast and I’d slug it down with Coke.

‘At my lowest I wouldn’t care if I didn’t wake up in the morning. At the start of 2017 I couldn’t walk from the bedroom to the bathroom without having an asthma attack. I was becoming totally immobile. 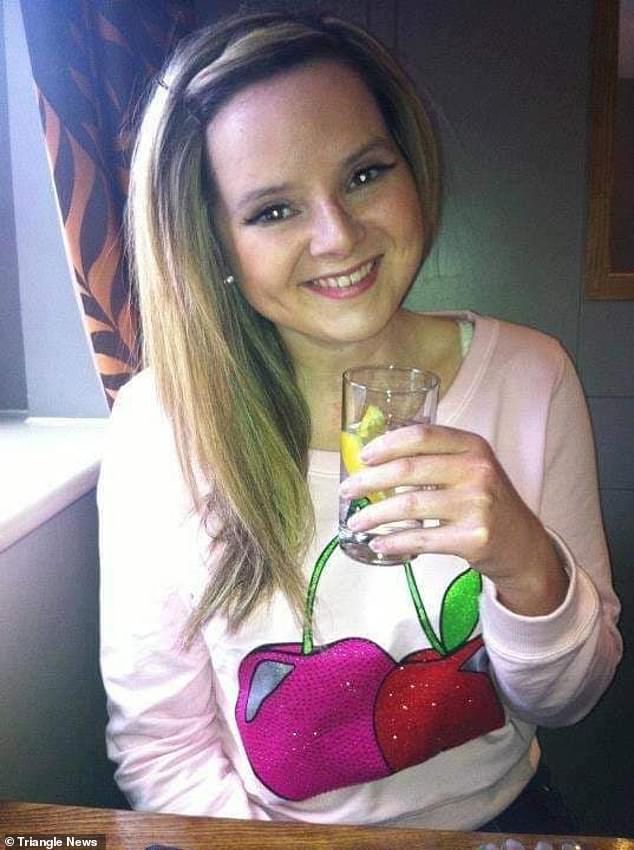 Amanda said her weight loss was triggered by not wanting her other daughter Savannah, 21, to be left without her. pictured: Amanda’s daughter Paris

‘I knew I wouldn’t be able to leave my bed in a year and within two years I’d be dead. I still had one daughter, Savannah, 21, and I didn’t want her to lose me too.

‘But I was ashamed of the way I looked and didn’t ever want to leave home.

‘Being taunted on the street and mocked in the gym took its toll. I thought I wasn’t going to lose weight in a candy shop so what did they expect? I just hated myself and felt like I didn’t deserve to be seen by the outside world.’

Amanda paid privately for the gastric sleeve surgery in the UK in August 2017 using the savings she and Alistair set aside for a house of their own.

She spent two hours under the knife but it was just the beginning of her incredible body transformation.

She explained: ‘There was no point in investing all that money into a home and getting a 25-year mortgage if I was going to be dead in two years. I wouldn’t even have been able to enjoy it. 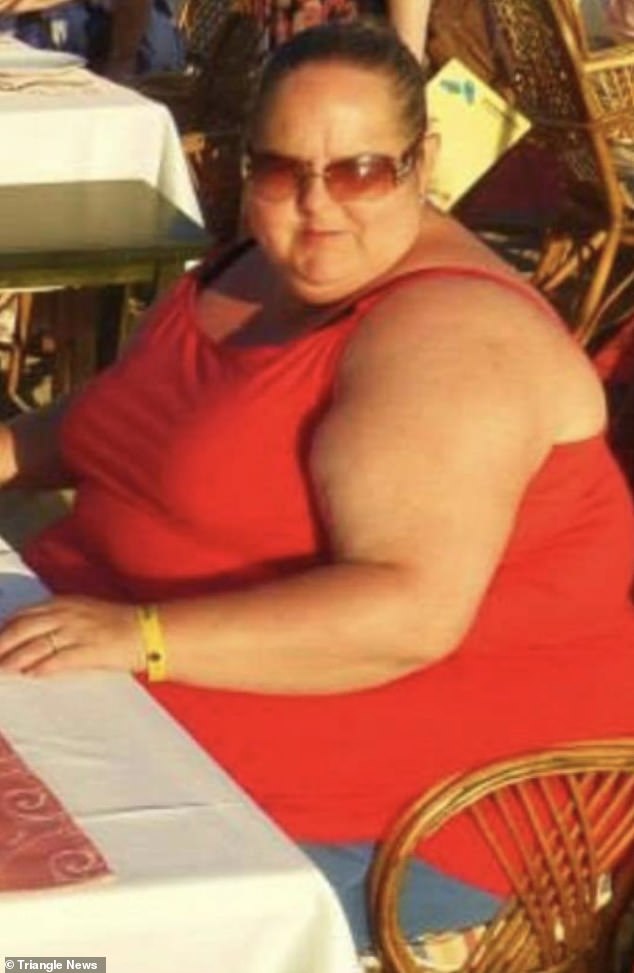 Amanda revealed her gastric sleeve surgery took just two hours and she chose to do it privately because the NHS has a three years waiting list. Pictured: Amanda before 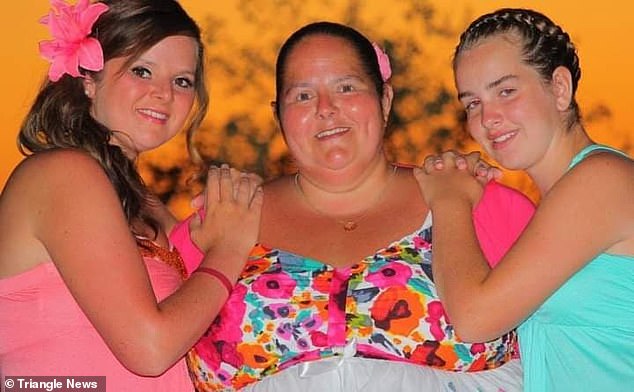 Amanda overhauled her diet after the surgery and reduced the size of her food portions. Pictured: Amanda before, with daughters Paris and Savannah

Snack – toast and up to six chocolate digestive biscuits

Drinks – Five cups of coffee and three cans of Coke

Snack – either 12 almonds or half a packet of pork crunch

‘And I didn’t go down the NHS route because the waiting list is 18 months to three years and I would have been dead within two.

‘I lost 10 stone from it within a year of the surgery. It allowed me to see the light at the end of the tunnel, but the problems didn’t end there.’

Amanda changed to a much healthier diet by scrapping fizzy drinks and cutting her portions but was unable to exercise because she was left with a ‘huge hanging apron of excess skin’ on her stomach which fell halfway down her thighs.

She said: ‘I still wasn’t happy in myself and I couldn’t get clothes to fit properly so I still wore tents as I called them. My husband even bought me a bike for my birthday and I couldn’t ride it because my stomach was in the way and I couldn’t lift my legs up. 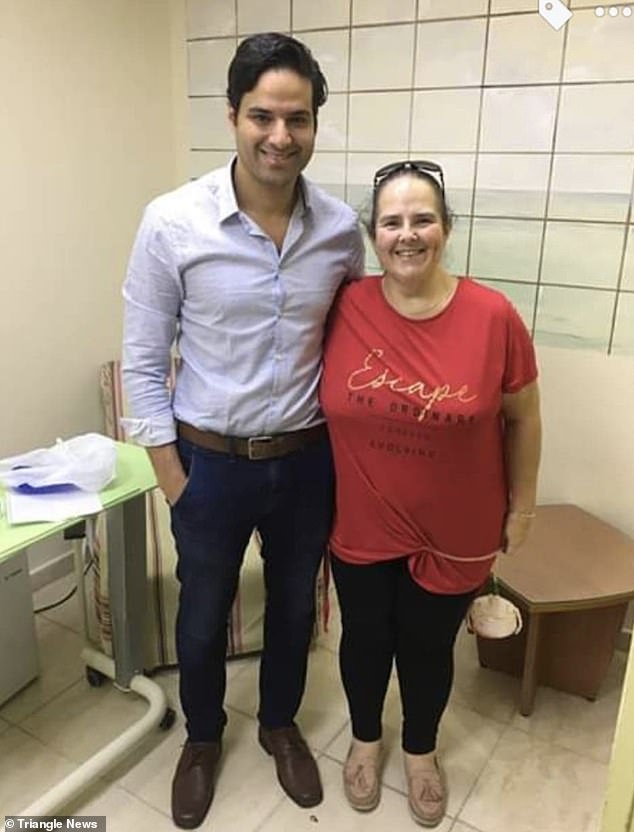 Amanda traveled to Egypt to have a tummy tuck because excess skin was making it difficult to buy clothes and exercise. Pictured: Amanda and professor Tamer Abdelbak after surgery

‘As a woman you want to take pride in how you look and the excess skin was really upsetting.’

In October 2018, Amanda decided to travel to Egypt for a tummy tuck and believes that was the surgery which changed everything.

‘I came round from the three-hour surgery and the first thing I did was push the blankets down to feel my stomach and my husband said my first words were, “Thank god it’s gone”,’ she recalled.

‘The surgeon removed the weight of a small child, 32 pounds, and it saved my life. I started eating dinner from tea plates and I’d always have leftovers which was alien to me. That was my life-saver.’

Amanda has now transformed her appearance and her lifestyle and said the icing on the cake was tying the knot to Alistair in June 2018 after being engaged for four years. 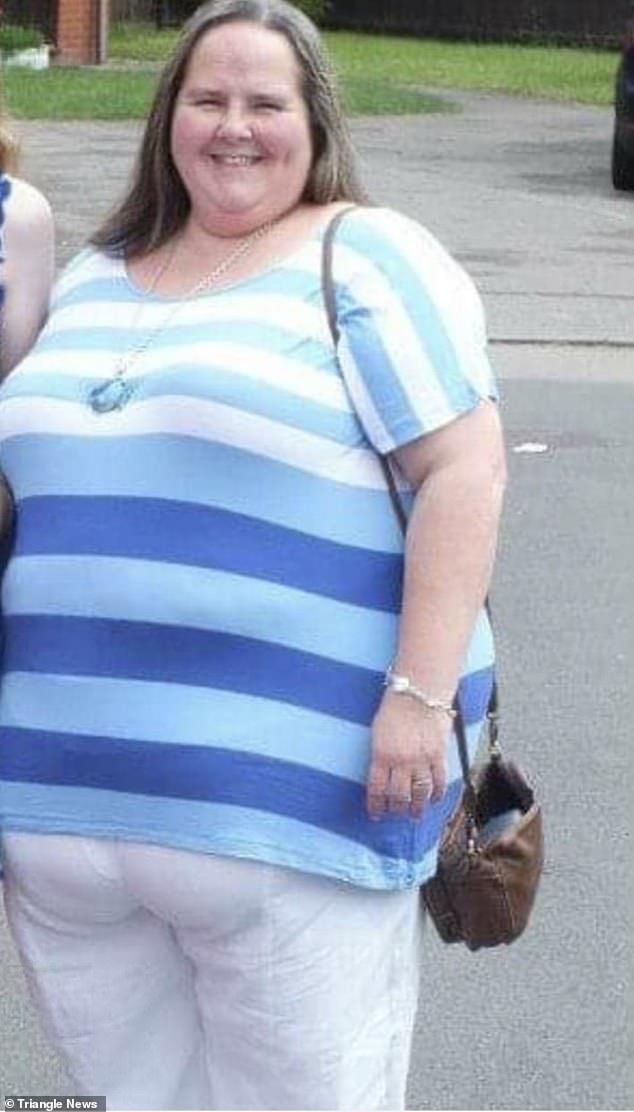 Amanda who had been engaged for four years, said the icing on the cake after her weightloss was getting married to Alistair. Pictured: Amanda before 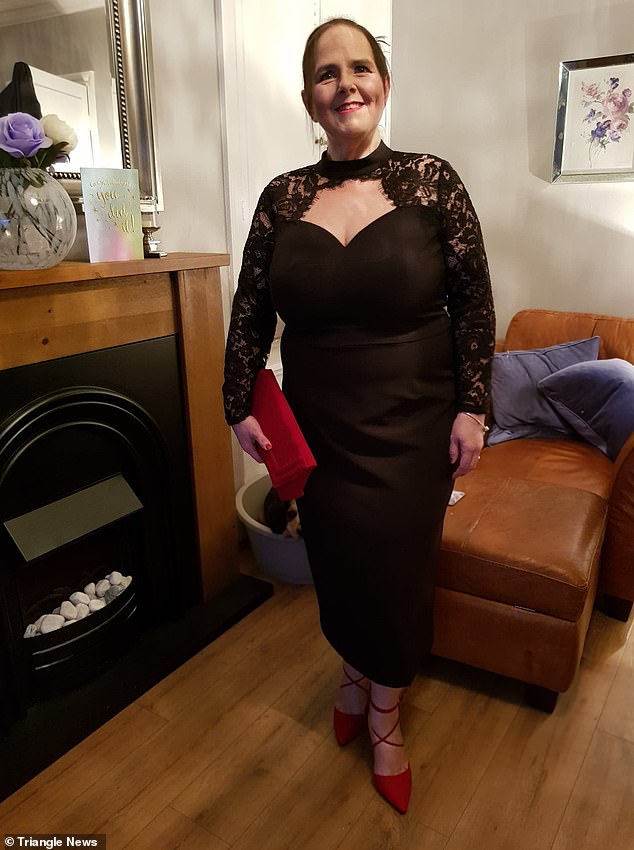 Amanda (pictured) who now weighs less than 15st, revealed her goal to drop to a size 14

She said: ‘I knew I could never walk down the aisle weighing 27st. My family are now super proud of me and they know it’s been a long battle.

‘I believe Paris would have been proud of me too. She had been studying at university to become a human rights lawyer. I miss her so much every single day, I wish she was here to see how much I’ve achieved.’

And Amanda, who is now just under 15st, says she is still losing weight and her dream is to drop to a size 14.

She added: ‘I feel like a totally new person and I no longer have any qualms about leaving home. I now love clothes shopping and I can even stand up straight!

‘Never in a million years did I think I would ever be normal again.’ 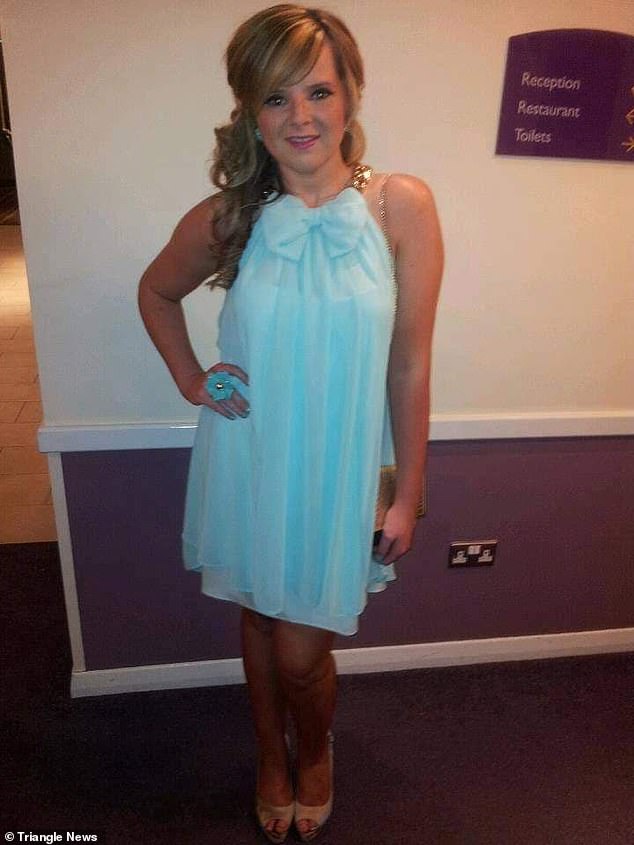 Amanda said Paris (pictured) would’ve been proud of her, explaining she had been studying at university at the time of her death

8 Healthier Foods to Eat for Training and Weight Loss

4 Breakfast Sandwiches No One Should Have Anymore In 2021 (They Slow Down Your Metabolism SO Much!)

What is the perfect amount of fruit to eat for good health?

How this mom lost 65 pounds after postpartum depression